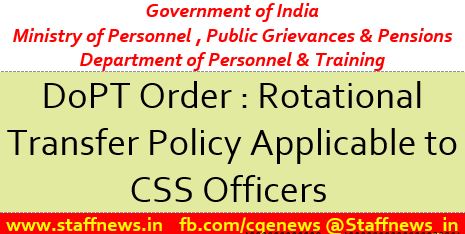 The undersigned is directed to refer to this Department’s O.M. of even number dated 15th July 2015 and subsequent O.Ms dated h October 2016, 1st May 2017 and 30th November 2018 vide which revised Rotational Transfer Policy, applicable to CSS officers, was circulated.

2. The competent authority has now approved the following modifications/ additions in the Rotational Transfer Policy of CSS Officers:

(i) Para-12 (Officers returning from deputation/ long l eave/ long term training etc .) of the existing RTP guidelines is modified and replaced as under:

An ASO/SO/US/DS/Di rector returning from Deputation/ Long leave/ Long Term Training will be posted to any Ministry/ Department based on the Administrative exigencies, with the approval of the Competent Authority. In such cases this posting will be treated as a fresh tenure. In case it is decided that an officer is to be posted back to the same Ministry/ Department he last served, then his tenure will be limited to the balance period of the tenure prescribed for the grade subject to the availability of the vacancy and subject to the condition that at least one year of balance tenure is left.

(ii) A new sub-clause is added to para 14 (Preference for Posting) of the existing RTP guidelines to the effect that:

(f) The transferring out of Officers working in Establishment Office, DoPT will be done only with the concurrence of Establishment Officer (EO). The DoPT Administration will consult the EO and maintain a list of such Officers, ready to be sent to CS Division as and when RTP exercise is taken up.

3. The above modification/ amendment in RTP guidelines will be applicable with immediate effect.

All concerned Ministries/ Departments through the website of this Department.