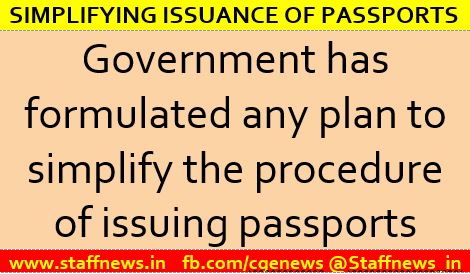 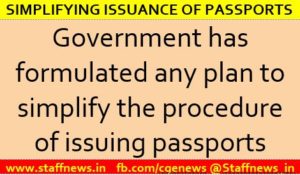 Will the Minister of EXTERNAL AFFAIRS be pleased to state:

(a) whether the Government has formulated any plan to simplify the procedure of issuing passports and establishing new passport offices;

(c) whether the Ministry has given any directive to open ‘Passport Seva Kendras’ in head post office of the districts;

(d) if so, the State-wise and district-wise details of ‘Passport Seva Kendras’ established in the country including Chhattisgarh so far; and

(e) the other steps being taken by the Government to improve existing procedure of issuing passports which is time consuming and complicated?

THE MINISTER OF STATE IN THE EXTERNAL AFFAIRS

(a) & (b) Post Office Passport Seva Kendras (POPSK) are being set up in asso- ciation with the Department of Posts in order to bring passport services closer to people residing in villages/remote/rural areas of the country. The POPSK are func- tioning like the other existing 93 Passport Seva Kendras (PSK). The process of is- suing passports has not changed after the opening of the POPSK. Applicants, who apply for their passports online through the passport portal, can schedule an ap- pointment and then visit the designated POPSK to complete the formalities, simi- lar to those at the PSK, prior to the issue of the passport. The photographs, bio- metrics and the supporting documents would be electronically captured at the POPSK prior to the issue of the Passport.

(d) The details of the 517 Passport Seva Kendras established in the country, including in Chhattisgarh, is enclosed at Annexure I.

(e) The Ministry has eased the passport issuing process and has made it an online procedure including getting appointments for submission of documents for passports. Effective technical infrastructure is in place to ensure that the Passport Seva system is available for access at all times from any location. The Passport Portal (www.passportindia.gov.in) is accessible to anyone, anywhere and anytime. With a view to address the challenge of digital divide, especially in the rural hinterland, the Ministry in association with CSC e-Governance Services India Ltd. (which is promoted by the Department of Electronics and IT), has facilitated online filing of passport applications, through the vast network of Common Service Centres (CSCs) across rural hinterland.

An applicant can now apply for a passport from anywhere in India. But Police verification would be conducted by the Police Station in whose jurisdiction the address mentioned in the form falls and the passport will also be dispatched at the same address.

In order to streamline, liberalize and ease the process of issue of passport, the Ministry has taken a number of steps to simplify passport policy which is expected to benefit the citizens of India in applying for and getting a passport. This is at Annexure-II.

ANNEXURE TO LOK SABHA QUESTION NO.472

Loading...
Newer Post
Stepping up of pay of Loco Inspectors appointed prior to 01.01.2006 at par with their junior appointed after 01.01.2006 and drawing more pay than the seniors :RBE No.07/2020
Older Post
Government has invested large amount from EPF subscribers in various stocks, bonds, debentures and mutual benefit schemes