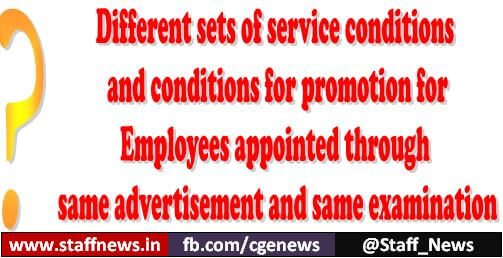 CONDITIONS FOR PROMOTION OF OFFICIALS

(a) whether different sets of service conditions and conditions for promotion to next grade are applicable/allowed under rules to officials of Central Government appointed through same advertisement and same examination for the same post;

(b) if so, the details thereof along with the relevant rules and orders in this regard; and

(c) if not, the details of the relevant rules/ orders in this regard? 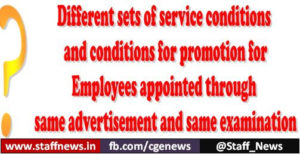 (a) to (c): Candidates recruited through a common advertisement and common examination may be allotted different cadres/ services under the Central Government on the basis of their choice, merit and eligibility conditions prescribed in the respective Service Rules/Recruitment Rules. After allocation of cadre/service to such selected candidates, their service conditions and eligibility for promotion to the next and subsequent grades in the hierarchy are regulated as per the provisions of relevant Recruitment Rules / Service Rules of the respective Cadres/Services of the Central Government.