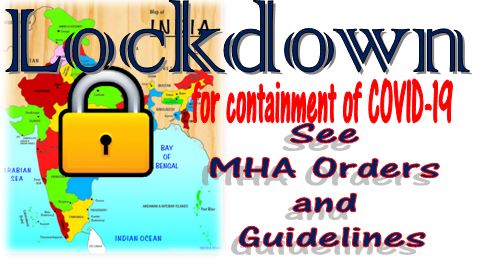 Lockdown for containment of COVID-19 – Epidemic in the country. See MHA Orders and Guidelines 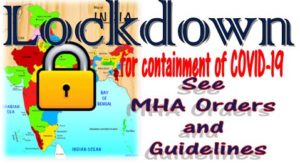 The COVID-19 epidemic has affected many countries and the World Health Organisation has declared it ‘Pandemic’.

Government of India (GOI) has been taking several proactive preventive and mitigating measures starting with progressive tightening of international travel, issue of advisories for the members of the public, setting up quarantine facilities, contact tracing of persons infected by the virus and various social distancing measures. Several advisories have been issued to States and Union Territories (UTs) for taking necessary measures to contain the spread of this virus. Government have temporarily suspended metro and rail services as well as domestic air traffic.

The situation has been continuously reviewed at the level of the Prime Minister of India. The PM has addressed the Nation on the need for preventive measures and has also held meeting with all the Chief Ministers through video conference.

Experts, keeping in view the global experiences of countries which have been successful in containing the spread of COVID-19 unlike some others where thousands of people died, have recommended that effective measures for social distancing should be taken to contain the spread of this pandemic

While steps taken by State/UT Governments are in the right direction, lack of uniformity in the measures adopted as well as in their implementation, may not serve the objective of containing the spread of the virus. Considering the situation. The National Disaster Management Authority (NDMA), chaired by Hon’ble Prime Minister Shri Narendra Modi, in exercise of the powers under section 6(2)(i) of the Disaster Management Act, 2005, has issued an Order dated 24.03.2020, directing the Ministries/ Departments of Government of India, and the State/Union Territory Governments and State/ Union Territory Authorities to take effective measures to prevent the spread of COVID-19 in the country.

In compliance of the said Order of NDMA, Ministry of Home Affairs (MHA) has issued an Order dated 24.03.2020 under Section 10(2)(l) of the Disaster Management Act, directing the Ministries/ Departments of Government of India, State/Union Territory Governments and State/ Union Territory Authorities to take effective measures for ensuring social distancing so as to prevent the spread of COVID-19 in the country. The Order shall remain in force, in all parts of the country, for a period of 21 days with effect from 25.03.2020.

Guidelines on the measures to be taken by Ministries/ Departments of Government of India, State/Union  Territory Governments and State/ Union Territory Authorities for containment of COVID-19 Epidemic in the Country.

1.    Offices of the Government of India, its Autonomous/ Subordinate Offices and Public Corporations shall remain closed.

b.   District administration and Treasury  [Addendum] include, field offices of the Accountant General, with bare minimum staff.

The above offices (SI. No 1 & 2) should work with minimum number of employees. All other offices may continue to work-from-home only.

3.    Hospitals and all related medical establishments, including their manufacturing and distribution units, both in public and private sector, such as dispensaries , chemist and medical equipment shops, laboratories, clinics, nursing homes, ambulance [Addendum] veterinary hospitals; pharmacies (including Jan Aushadhi Kendra) and Pharmaceutical research labs etc. will continue to remain functional. The transportation for all medical personnel, nurses, para-medical staff, other hospital support services be permitted.

4.    Commercial and private establishments shall be closed down.

a.   Shops, including ration shops (under PDS), dealing with food, groceries, fruits and vegetables, dairy and milk booths, meat and fish, animal fodder [Addendum] shops for seeds and pesticides. However, district authorities may encourage and facilitate home delivery to minimize the movement of individuals outside their homes.

d.   Telecommunications , internet services, broadcasting and cable services. IT and IT enabled Services only (for essential services) and as far as possible to work from home.

e.   Delivery of all essential goods including food, pharmaceuticals , medical equipment through E-commerce.

h.   Capital and debt market services as notified by the Securities and Exchange Board of India [Addendum] ]Data and call Centre for Government activities only.

All other establishments may work-from-home only.

b.   Production units, which require continuous process, after obtaining required permission from the  State Government

a.   Transportation for essential goods only.

b.   Fire, law and order and emergency services.

c. Operations of Railways, Airports and Seaports for cargo movement, relief and evacuation and their related operational organisations.

d. Inter-state movement of goods/cargo for inland and exports.

a.   Hotels, homestays, lodges and motels, which are accommodating tourists and persons stranded due to lockdown, medical and emergency staff, air and sea crew.

9.   All places of worship shall be closed for public. No religious congregations will be permitted, without any exception.

gatherings shall be barred.

11.   In case of funerals , congregation of not more than twenty persons will be permitted.

12. All persons who have arrived into India after 15.02.2020, and all such persons who have been directed by health care personnel to remain under strict home/ institutional quarantine for a period as decided by local Health Authorities, failing which they will be liable to legal action under Sec. 188 of the IPC.

13. Wherever  exceptions  to  above  containment  measures  have  been allowed,  the organisations/employers  must  ensure necessary  precautions  against  COVID-19 virus, as well as social distance measures, as advised by the Health Department from time to time.

15. All enforcing authorities to note that these strict restrictions fundamentally relate to movement of people, but not to that of essential goods.

16. The Incident Commanders will in particular ensure that all efforts for mobilisation of resources, workers and material for augmentation and expansion of hospital infrastructure shall continue without any hindrance.

17. Any person violating these containment measures will be liable to be proceeded against as per the provisions of Section 51 to 60 of the Disaster Management Act, 2005, besides legal action under Sec. 188 of the IPC (as per Appendix).

51.   Punishment for obstruction, etc.-Whoever, without reasonable cause –

(a)    obstructs any officer or employee of the Central Government or the State Government, or a person authorised by the National Authority or State Authority or District Authority in the discharge of his functions under this Act; or

52.  Punishment for false claim.-Whoever knowingly  makes a claim which he knows or has reason to believe to be false for obtaining any relief, assistance, repair, reconstruction or other benefits consequent to disaster from any officer of the Central Government, the State Government , the National Authority, the State Authority or the District Authority , shall, on conviction be punishable with imprisonment for a term which may extend to two years, and also with fine.

54. Punishment for false warning.-Whoever makes or circulates a false alarm or warning as to disaster or its severity or magnitude, leading to panic, shall on conviction, be punishable with imprisonment which may extend to one year or with fine.

55.  Offences by Departments of the Government.-(1) Wher!3 an offence under this Act has been committed by any Department of the Government, the head of the Department shall be deemed to be guilty of the offence and shall be liable to be proceeded against and punished accordingly unless he proves that the offence was committed without his knowledge or that he exercised all due diligence to prevent the commission of such offence.

(2) Notwithstanding anything contained in sub-section (1), where an offence under this Act has been committed by a Department of the Government and it is proved that the offence has been committed with the consent or connivance of, or is attributable to any neglect on the part of, any officer, other than the head of the Department, such officer shall be deemed to be guilty of that offence and shall be liable to be proceeded against and punished accordingly.

56.    Failure of officer in duty or his connivance at the contravention of  the provisions of this Act.-Any officer, on whom any duty has been imposed by or under this Act and who ceases or refuses to perform or withdraws himself from the duties of his office shall, unless he has obtained the express written permission of his official superior or has other lawful excuse for so doing, be punishable with imprisonment for a term which may extend to one year or with fine.

57. Penalty for contravention of any order regarding requisitioning.-lf any person contravenes any order made under section 65, he shall be punishable with imprisonment for a term which may extend to one year or with fine or with both.

Explanation .-For the purpose of this section- (a) “company” means any body corporate and includes a firm or other association of individuals; and (b) “director”, in relation to a firm, means a partner in the firm.

59. Previous sanction for prosecution.-No prosecution for offences punishable under sections 55 and 56 shall be instituted except with the previous sanction of the Central Government or the State Government, as the case may be, or of any officer authorised in this behalf, by general or special order, by such Government.

An order is promulgated by a public servant lawfully empowered to promulgate such order, directing that a religious procession shall not pass down a certain street. A knowingly disobeys the order, and thereby causes danger of riot. A has committed the offence defined in this section.