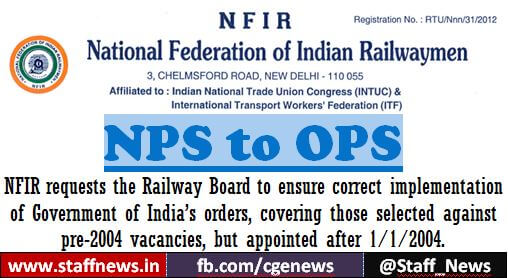 NPS to OPS – Coverage under Railway Pension Rules in place of NPS : NFIR writes to Secretary, Railway Board for correct implementation of DoP&PW OM dated 17.02.2020

Sub: Coverage under Railway Services (Pension) Rules, 1993, in place of National Pension System, of those Railway employees whose selection for appointment was finalized before 01/01/2004 but who joined Railway service on or after 01/01/2004-reg.

Read: Revision of channels of Promotion (AVC) of various categories of Medical Department: Railway Board Order RBE No. 178/2019

It has since been brought to the notice of the Federation by the affiliated Unions of NFIR that though the instructions of the Government contained in the O.M. dated 17th February, 2020 are very clear and also contain illustrations so far as applicability of these instructions is concerned, there is however confusion in the Zones/PUs due to issuance of model format among the concerned employees for opting to Railway Services (Pension) Rules, 1993. The proforma circulated mentioned following condition in Para 2:-

Federation desires to convey that while the Government of India’s instructions clearly state the cases of the recruitment whose result was declared before 01/01/2004 but offer of appointment and actual joining delayed on various accounts, the stipulation (mentioned above) in Para 2 of the model format is totally contrary which is causing serious difficulties in implementation of the order and at the same time is grossly disadvantageous to those Railway employees who were selected against pre-2004 vacancies, who actually deserve to be covered under these instructions. A copy of model format issued by General Manager (P), N.C. Railway under their letter No.797-E/Estt./NG/Cadre/Misc/18 dated 11/03/2020 is enclosed for ready reference.

NFIR, therefore, requests the Railway Board to kindly intervene and see that the contents of the format are modified duly deleting the phrase “including psycho/aptitude test/viva-voce” so as to cover the illustrations given by the DoP&PW vide G.M. dated 17/02/2020 to ensure correct implementation of Government of India’s orders, covering those selected against pre-2004 vacancies, but appointed after 1/1/2004. 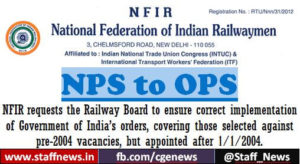