Consolidated Instructions on procedure to be adopted for making appointments on deputation basis – Crucial date for determining the age-limit: DoPT OM dated 16.04.2020 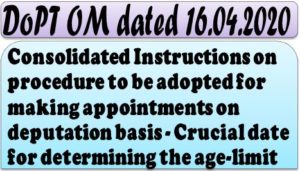 Subject: Consolidated Instructions on procedure to be adopted for making appointments on deputation basis – Crucial date for determining the age-limit – reg.

View: Maximum age limit in case of appointment by deputation at SAG and above level : Amendment of Recruitment Rules/Service Rules: DoPT Order

The undersigned is directed to refer to DoPT OM AB-14017/71/89-Estt.RR dated 03.10.1989 prescribing the procedure /guidelines to be followed in cases where appointment is to be made on deputation basis. The relevant para of the aforesaid OM, prescribing crucial data for determination of eligibility, reads as under:

6.1 Where a post is required to be filled by transfer on deputation (including short term contract)/transfer, it is normally laid down in the recruitment rules that officers holding posts in a particular scale of pay who have completed specified years of regular service in the scale are eligible to be considered. The crucial date for determination of eligibility will be as follows: –

i) In the case of a vacancy already existing at the time of issue of the communication inviting nominations, the eligibility may be determined with reference to the last date prescribed for receipt of nominations in the Ministry / Departments /Organization responsible for making appointment to the post i.e. originating Ministry etc.

ii) In the case of an anticipated vacancy the crucial date for determining eligibility should be the date on which the vacancy is expected to arise.

2. These instructions were subsequently modified vide DoPT OM No AB.14017/49/92-Estt. (RR) dated 15.06.1993, to provide for the crucial date for determination of eligibility in cases of composite method of recruitment. Clarifications on the subject have also been provided in the replies to Frequently Asked Questions (FAQs), issued from time to time.

4. Accordingly, the instructions regarding crucial date for determination of eligibility for appointment on deputation basis and through the composite method (deputation/promotion), as provided in OMs dated 3.10.1989 and 15.6.1993, are hereby reiterated, with further advice to all Ministries/Departments to strictly adhere to these guidelines while making appointments to various posts under their administrative control.

(Shukdeo Sah)
Under Secretary to the Govt. of India

1. All Ministries/Departments of Government of India