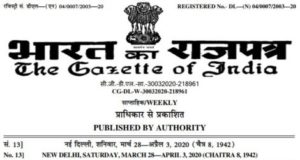 2. Definitions—(1) In these regulations, unless the context otherwise requires:—

c. “Competent Authority” means the Secretary, of the Delhi Urban Art Commission or any other authority as may be designated by the Commission for the purposes of these regulations;

f. “Emoluments” includes Basic Pay (substantive or officiating), stagnation increments, dearness pay, dearness allowance but does not include special allowance, personnel pay, deputation (duty) allowance and other allowances and perquisites which are not to be computed for calculation of superannuating pension (at time of retirement) and the expression “average emoluments” shall be the average of the emoluments drawn during the last ten months;

g. “Employees” means any person appointed under sub-section(3) of section 9 of the Act before 1st day of January, 2004, who was a petitioner in O.A No.1437/2009 filed in the Hon’ble Central Administrative Tribunal and includes a petitioner whose services are lent by the Commission to the Central Government or to any State Government or any other autonomous body or statutory body under the Central or the State Government;

i. “Scheme” means the scheme of insurance as described in the regulation 9;

j. “Trustees” means the Board of trustees for the time being of the Delhi Urban Art Commission constituted under regulation 3;

(2) All other words and expressions used herein and not defined in these regulations, but defined in the Act, shall have the meanings respectively assigned to them under the Act.

(2) The Board of trustees shall consist of the following, namely:—

(a) a Chairperson to be nominated by the Commission;

(c) two representatives of the employees to be nominated by the Commission from amongst the members.

(3) The Administrative Officer of the Commission shall convene meetings, keep records thereof , take necessary steps to ensure maintenance of accounts in accordance with the provisions of these regulations and also carry out the decisions of the trustees.

(4) The Commission may fill up casual vacancies created by the death or resignation of a member or other causes.

(5) the term of office of the Chairperson and other trustees shall be three years, commencing from the respective dates on which they are nominated as Chairperson or trustees, as the case may be.

(6) A trustee nominated to fill a casual vacancy shall hold office for the unexpired term of office of the trustee in whose place he is nominated.

(7) An outgoing trustee shall be eligible for re-nomination.

4. Commission’s decision regarding eligibility to be final:

The Commission’s decision regarding the eligibility of an employee or his next of kin in case of deceased employee in terms of the provisions of these regulations for the purpose of the Scheme shall be final and binding on all the parties concerned.

5. Transfer of equitable interest out of the Scheme: In the event of an employee at any time ceasing to be in service, the trustees with the prior approval of the Commission, shall if the employee so desires, pay to an Approved Fund to be registered with the Commissioner of income-tax under Part B of the schedule to the Income-tax Act, 1961, which has power to accept such a transfer and of which the employee may become a member, an amount equivalent to the value of his equitable interest in the Scheme and intimate such transfer to the Commissioner of income tax.

6. Evidence of age: The trustees shall certify to the Corporation the age of a member before he is admitted to the Scheme and if the age of the member is conclusively proved later to have been incorrectly stated, the Corporation shall make appropriate adjustment in the benefits having regard to its normal practice.

7. Member not to withdraw: No Member shall withdraw from the Scheme while he is still an employee with the Commission.

PART-II
CONTRIBUTIONS AND SCHEME OF INSURANCE

8. Contributions: (1) There, shall be paid by the Commission to the trustees in respect of each eligible member, a onetime lump sum contribution as determined after actuarial investigation and the trustees shall pay the same to the Corporation for the purpose of the Scheme;