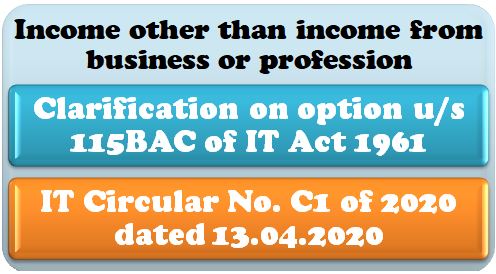 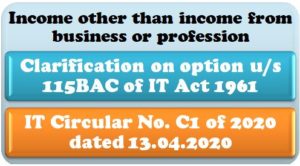 Clarification in respect of option under section 115BAC of the Income-tax Act, 1961

Section 115BAC of the Income-lax Act, 1961 (the Act), inserted by the Finance Act, 2020 wef the assessment year 2021-22, inter alia, provides that a person, being an individual or a Hindu undivided family having income other than income from business or profession”, may exercise option in respect of a previous year to be taxed under the said section 115BAC alongwith his return of income to be furnished under sub-section (1) of section 139 of the Act for each year. The concessional rate provided under section 115BAC of the Act is subject to the condition that the total income shall be computed without specified exemption or deduction, set­ off of loss and additional depreciation.

2. Representations expressing concern regarding tax to be deducted at source (TDS) has been received stating that as the option is required to be exercised at the time of filing of return, the deductor, being an employer, would not know if the person, being an employee, would opt for taxation under section 115BAC of the Act or not. Hence, there is lack of clarity regarding whether the provisions of section 115BAC of the Act are to be considered at the time of deducting tax.

3. In order to avoid the genuine hardship in such cases, the Board , in exercise of powers conferred under section 119 of the Act, hereby clarifies that an employee, having income other than the income under the head “profit and gains of business or profession” and intending to opt for the concessional rate under section 115BAC of the Act, may intimate the deductor, being his employer, of such intention for each previous year and upon such intimation, the deductor shall compute his total income, and make TDS thereon in accordance with the provisions of section 115BAC of the Act. If such intimation is not made by the employee, the employer shall make TDS without considering the provision of section 115BAC of the Act.

5. Further, in case of a person who has income under the head “profit and gains of business or profession” also, the option for taxation under section 115BAC of the Act once exercised for a previous year at the time of filing of return of income under sub-section (1) of section 139 of the Act cannot be changed for subsequent previous years except in certain circumstances.  Accordingly, the above clarification would apply to such person with a modification that the intimation to the employer in his case for subsequent previous years must not deviate from the option under section 115BAC of the Act once exercised in a previous year.

Loading...
Newer Post
Postal Life Insurance Gazette Notification: Rates of Bonus for the Financial Year 2020-21 from 01.04.2020
Older Post
Clarification regarding short deduction of TDS/TCS due to increase in rates of surcharge by Finance (No.2) Act, 2019: IT Circular No. 8/2020