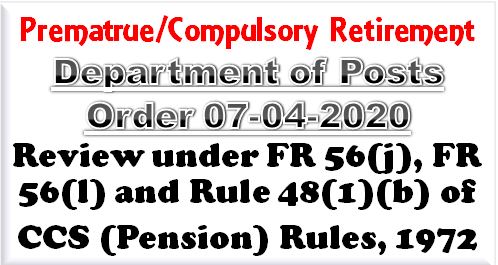 No. X-19/6/2019-SPN-II
Government of India
Ministry of Communications
Department of Posts

FR 56(j), FR 56(l) and Rule 48(1)(b) of CCS (Pension) Rules, 1972 provide enabling provisions for premature retirement of a Government servant. Comprehensive instructions / guidelines have been issued by the Department of Personnel & Training (DOPT) to assess the suitability of a Government servant for continuance in service or for retiring prematurely in public interest. For appropriate implementation of the provisions of FR 56 and Rule 48 of CCS (Pension) Rules, 1972, further instructions have also been issued by the Department of Posts (DoP). Some of such communications issued by DOPT and DoP are as under:-

Besides, other communications on the subject issued by the DOPT are available on their website (dopt.gov.in). It is imperative that instructions issued from time to time by DOPT are followed while considering cases under the provisions of FR 56 and Rule 48 of CCS (Pension) Rules, 1972.

A. Composition of Review Committee

B. Composition of Representation Committee

3. Of late it is observed that relevant instructions are not being followed in letter and spirit. Accordingly, it is felt appropriate to issue further guidelines on some of the aspects relating to premature retirement under the aforesaid provisi0ns.

4. Timely Review:- It is observed that in most of the cases time schedule laid down for review is not followed. Consolidated instructions issued by DOPT vide aforesaid OM of 21.03.2014 provides for maintenance of a register of employee due for review. It is therefore imperative that a register is prepared, well in advance, say by 3Qth June of each year, showing the list of officials due for review in each quarterly period of following calendar year. The register should be scrutinized, by an officer to be nominated by the Chairperson of the Review Committee, at the beginning of the quarter to schedule the meeting of the Review Committee.

5. Minutes of Review Committee:- It is observed that minutes of the Review Committee are merely reflecting the decision, even if it is decided to prematurely retire a Government servant, e.g. ‘Recommended’, ‘Not recommended due to unsatisfactory service records’, etc. Needless to say that decision of premature retirement is subject to judicial scrutiny and therefore the process followed in taking such decision should be seen as cogent and evidence based. Accordingly, it is advised to take note of the following:-

a) In cases where it is decided to retain the government servant, minutes of Review Committee shall be a small paragraph inter alia including the list of service records relied upon, summarized assessment of those records and conclusion of such assessment leading to retaining in service.

b) In cases where it is decided for premature retirement of a government servant, minutes of Review Committee should be self-speaking inter alia including a pen picture based on the entries made in ACR/APAR dossier, a statement of service records relied upon, detail assessment of those records, findjngs of such assessment with reference to guidelines of deciding ‘INEFFECTIVENESS and ‘DOUBTFUL INTEGRITY , and summarized reasons for the conclusion of premature retirement from service. Minutes should also clearly record that ‘It is necessary to prematurely retire the Government servant in public interest’.

8. Notice / Order of Premature Retirement:- Notice I Order of premature retirement can be given under both FR 56G), FR 56(1) and Rule 48(1)(b) of CCS (Pension) Rules, 1972. Since a common proforma has been prescribed for issue of notice / order under both the provisions, it is often observed that notice / order issued by Circles quote both the provisions. It is imperative that notice I order is issued by quoting only the relevant provision. Circles are requested to sensitize the officers concerned appropriately.

a) Alongwith the notice / order of premature retirement, a separate communication may be issued to the government servant indicating that representation, if any, against such notice I order be addressed to ‘Chairman, Representation Committee’ with copy to ‘Head of the Circle’ and Member (Personnel) within three weeks from the date of service of such notice I order.

b) Even if a representation is addressed I submitted to Head of Circle I Region I Division, it may be deemed to have been addressed to Chairman, Representation Committee for taking appropriate action thereon.

10. Adherence of prescribed time schedule is of paramount importance so that entire process from review to disposal of representation is concluded well before the due date of premature retirement.

11. Guidelines brought out here in are in addition to and not in abrogation of instructions I guidelines issued by the DOPT. Circles are requested to bring the content of this communication to the notice of all concerned .

Completion of 30 years of qualifying service/attains the age of 50/55 years: Periodical review of performance of Government servants under Pension Rule

Strengthening of administration-Periodical review under FR 56(j) and Rule 48 of CCS (Pension) Rules, 1972 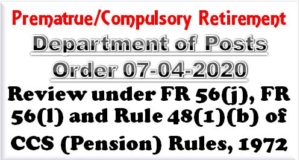 Loading...
Newer Post
Standard formats for offer of engagement to the GDS Posts issued by Deptt. of Posts
Older Post
Waive off penalty/revival fee (default fee) in RD/PPF/SSA Accounts due to lockdown situation in view of COVID-19