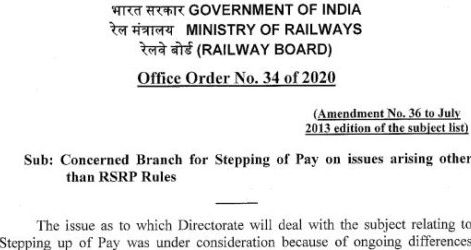 Railway Board Order: Concerned branch for Stepping up of Pay on issue arising other than RSRP Rules

Sub: Concerned Branch for Stepping of Pay on issues arising other than RSRP Rules

The issue as to which Directorate will deal with the subject relating to Stepping up of Pay was under consideration because of ongoing differences between Directorates. The following has been decided with the approval of the Competent Authority:-

(a) Stepping up of cases between senior and junior officials due to implementation of various provisions of different Pay Commissions would be dealt with by Pay Commission Directorate(PC-VI/PC-VII as the case may be);

(b) Stepping up of cases between senior and junior officials due to being on leave/deputation/working on ex-cadre post by the senior employee and promotion of junior employee during this period i.e on aspects other than RSRP rules would be dealt with by F(E) Directorate.

3. Accordingly the subject list of F(E)-II and PC-VI/PC-VII stands amended.

Sd/-
(B. Majumdar)
Joint Secretary/Railway Board

All Officers and Branches in Board’s Office/Metro Bhawan, Pragati Maidan and at Dayabasti,New Delhi 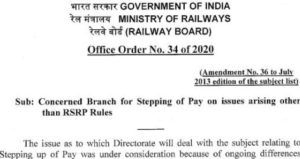 Loading...
Newer Post
Notional Increment on the day of superannuation: Concerned Branch to deal with issues in Railway Board
Older Post
Donation of one-day salary to PM CARES Fund for any or all of the months from May 2020 to March 2021: CGDA