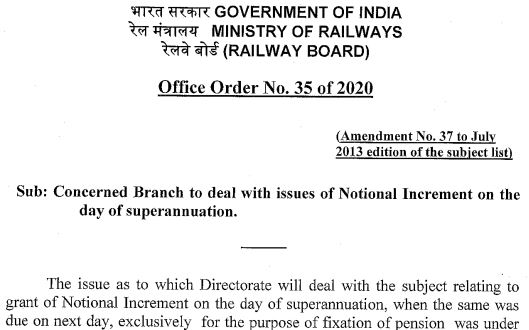 Notional Increment on the day of superannuation: Concerned Branch to deal with issues in Railway Board

Notional Increment on the day of superannuation: Concerned Branch to deal with issues in Railway Board

Sub: Concerned Branch to deal with issues of Notional Increment on the day of superannuation.

The issue as to which Directorate will deal with the subject relating to grant of Notional Increment on the day of superannuation, when the same was due on next day, exclusively for the purpose of fixation of pension was under consideration because of differences between concerned branch regarding processing of such cases.

(B. Majumdar)
Joint Secretary/Railway Board

All Officers and Branches in Board’s Office/Metro Bhawan, Pragati Maidan and at Dayabasti,New Delhi