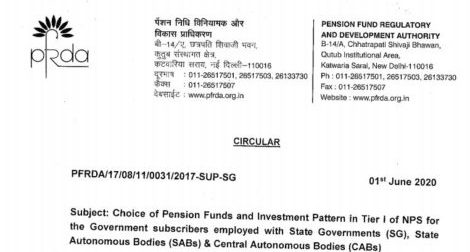 Choice of Pension Funds and Investment Pattern in Tier I of NPS for the Government subscribers (SG, SABs & CABs) 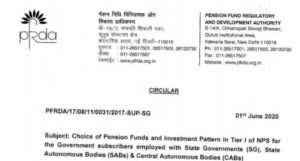 A This has reference to the Gazette Notification F. No. 1/3/2016-PR. dated 31-01- 2019 issued by Dept. of Financial Service (DFS), Ministry of Finance (MoF), pursuant to which the Authority vide its circular no PFRDA/2019/12/REG-PF/1 dated 08th May 2019, introduced the choice of the pension fund and investment pattern in the Tier I of the NPS for the employees of the Central Government.

B. The following were introduced by Central Government through the DFS Gazette Notification ( Annexure 1) mentioned supra

I.   Enhancement in Government Co- Contribution-

IL Compensation For Non-Deposit Or Delayed Deposit  Of Contributions in the following cases:

1. where the NPS contributions were deducted from the salary of the Government employee but the amount was not remitted to CRA system or was remitted late;

2. where the NPS contributions were not deducted from the salary of the Government employee;

(Details may be seen from Annexure 1)

III. Choice of Pension Fund And Investment Pattern In Tier-I Of NPS as under:

1.  Choice   of  Pension  Fund: The  Government  subscriber  shall  be allowed to choose any one of the pension funds including  Private sector pension funds. They can change their option once in a year. However, the current provision of combination of Public  Sector Pension Funds will be available as default option for existing as well as new Government subscriber.

2.  Choice    of    Investment     Pattern:   The   following    options    for investment choices shall be offered to Government subscribers

(i) Default Scheme: The existing scheme in which funds are allocated among three Public Sector undertaking fund managers shall continue as default scheme for both existing and new subscribers.

(ii) Scheme G: Employees who prefer returns with comparatively less amount of risk shall be given an option to invest 100% of the funds in Govt. securities. (Scheme G)

(iii) Auto Choice Life Cycle Funds: Employees preferring better returns with comparatively higher risk shall be given the options of the following Life Cycle based schemes-

The Government subscribers may exercise one of the above choices of Investment pattern twice in a financial year.

IV. Implementation of choices to the legacy corpus:

PFRDA shall draw up a scheme in due course for transfer of accumulated corpus as per new choices of Government subscribers in a reasonable time frame of say five years. Once PFRDA draws up this scheme, change in Pension Funds or investment pattern shall be allowed in respect of the accumulated corpus in accordance with that scheme.

VI. For investment option of Default scheme as per para B.III 2 (i) above, all other terms and conditions as contained in the investment guidelines issued by the Authority dated 03.06.2015 for NPS Schemes (Applicable to Scheme CG, Scheme SG, Corporate CG and NPS Lite Schemes and APY) and subsequent amendments made thereto shall be applicable.

VII. Further, for investment options as per para B.III 2 (ii) or B.III 2.(iii) (a) and (b) above, all other terms and conditions as contained in the investment guidelines issued by the Authority dated 04.05.2017 in respect of NPS Schemes {Other than Govt. Sector (CG & SG), Corporate CG, NPS Lite and APY} and subsequent amendments made thereto shall apply.

C.     It has been brought to the notice of the Authority that while some of the State Governments (SGs) I SABs/ CABs have either partially or wholly adopted the provisions of Gazette Notification F. No.1/3/2016-PR. dated 31-01-2019 issued by Dept. of Financial Service (DFS), Ministry of Finance (MoF), the others have been seeking clarifications on the same. It is, therefore, clarified that the State Governments ( SGs) I SABs/ CABs are free to adopt the provisions of the said Gazette notifications on their own volition , based on their own internal approvals and notifications , without seeking the Authority’s approval.