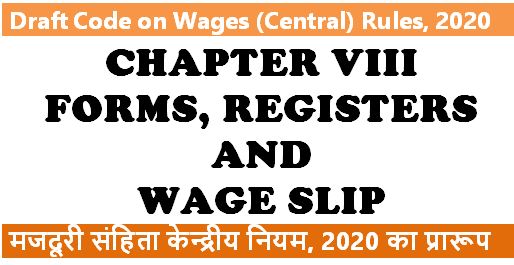 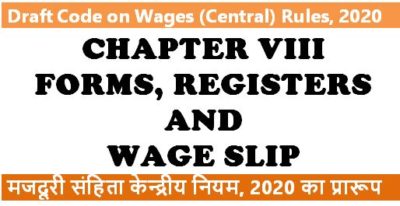 51. Form of register, etc.-(1) all fines and all realizations thereof referred to in sub-section (8) of section 19 shall be recorded in a register to be kept by the employer in form – i appended to these rules, electronically or otherwise and the authority referred to in said sub-section (8) shall be the Deputy Chief Labour Commissioner (Central) having jurisdiction.

(2) All deductions and all realizations referred to in sub-section (3) of section 21 shall be recorded in a register to be kept by the employer in Form- I appended to these rules, electronically or otherwise.

(3) Every employer of an establishment to which the Code applies shall maintain registers under sub-section (1) of section 50 in Form I and Form IV, electronically or otherwise.

52. Wage slip.– Every employer shall issue wage slips, electronically or otherwise to the employees in Form V under sub-section (3) of section 50 on or before payment of wages.

(1) When a complaint is filed before the officer appointed under sub-section (1) of section 53 (hereinafter in this rule referred to as the officer) in respect of the offences referred to in said sub-section either by an officer authorized for such purpose by the Central Government or by an employee aggrieved or a registered trade union registered under the Trade Unions Act, 1926 or an Inspector-cum-Facilitator, the officer,after considering such evidences as produced before him by the complainant, is of the opinion that an offence has been committed, shall issue summons to the offender on the address specified in the complaint fixing a date for his appearance .

(4) The officer shall after hearing the parties and considering the evidences both oral and documentary decide the complaint in accordance with the provisions of the Code.

(1) An accused person desirous of making composition of offence under sub-section (1) of section 56 may make an application in Form VI electronically or otherwise to the Gazetted Officer notified under said sub-section (1).

(2) The Gazetted Officer referred to in sub-rule (1), shall, on receipt of such application, satisfy himself as to whether the offence is compoundable or not under the Code and if the offence is compoundable and the accused person agrees for the composition, compromise the offence for a sum of fifty per cent of the maximum fine provided for such offence under the Code, to be paid by the accused within the time specified in the order of composition issued by such officer.