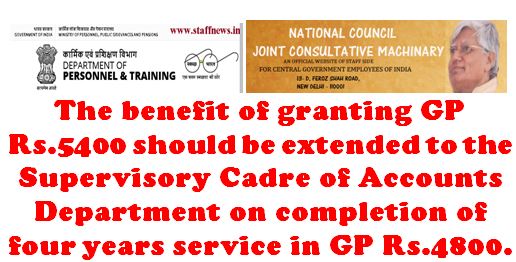 Pay anomaly in Supervisory Cadre of Accounts Department: JCM writes to DoPT to Grant GP 5400 after 4 years in GP 4800

Pay anomaly in Supervisory Cadre of Accounts Department: JCM writes to DoPT to Grant GP 5400 after 4 years in GP 4800

Your kind attention is invited towards our earlier letter dated 19th August, 2016, followed by reminders dated 24th May, 2017, January 14, 2019, 22nd August, 2019 and February 10, 2020, wherein it was requested that the benefit of Grade Pay Rs.5400 should be extended to the Supervisory Cadre in Accounts Department of the Ministry of Railways(who are the only left in this case) on completion of four years service in GP Rs.4800. It is worthwhile to mention here that the Supervisory Cadre of Accounts Department of the Railways is also entrusted with responsibilities of presenting Railway Accounts on widely accepted of accrual based Accounting in addition to presenting the Government Accounts as per requirements laid down in the Constitution of India. It would not be out of context to mention here that, Accounts Cadre is performing their duties under extreme pressure owing to huge number of vacancies and adopting modernization in technology.

Here it is worth-mentioning that, this issue is also an item of the Standing Committee of the NC/JCM, wherein it was told to us that, a committee has been formed and the matter would be resolved shortly. Regrettably, despite regularly pursuing the matter for the last around four years, nothing more has been heard in this regard from your good offices, while an Unrecognized Association has been replied by the DoP&T, vide letter No.19/2/2020-Estt.(Pay-I) dated 29th May, 2020, that this issue will be resolved within a few days. This practice is not fair as all such information should be routed through the NC/JCM(Staff Side), that too to the Recognized Unions/ Associations.

As the matter has already been delayed badly, resulting in serious resentment amongst the affected staff, it would be in all appropriateness that the benefit of granting GP Rs.5400 should be extended to the Supervisory Cadre in Accounts Department of Ministry of Railways(who are the only left in this case) on completion of four years service in GP Rs.4800. This will help end pay disparity between the Organized Accounts Cadres of the Government of India. We do hope that, correspondence in future should be dealt with according to the established practice, i.e. through the Staff Side(JCM).

We earnestly hope an early action in the matter. 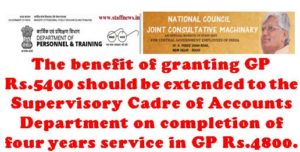 Loading...
Newer Post
Resolution to Prime Minister to immediately release the 7% Dearness Relief and payment of arrears to pensioner: NCCPA Decisions
Older Post
Choice for NPS Subscribers to have physical or ePRAN card