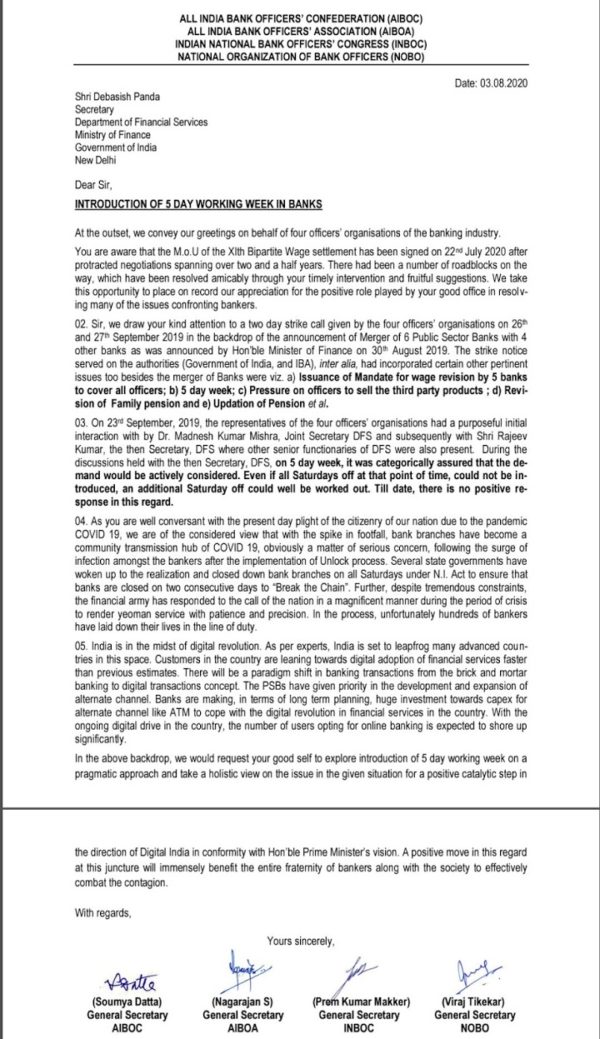 Introduction of 5 day working week in Banks – Urge for

Introduction of 5 day working week in Banks  – Urge for.  Request has been made by Banks Associations to the Secretary DFS, Ministry of Finance, New Delhi

At the outset, we convey our greetings on behalf of four officers’ organisations of the banking industry. You are aware that the M.0.U of the XIth Bipartite Wage settlement has been signed on 22nd July 2020 after protracted negotiations spanning over two and a half years. There had been a number of roadblocks on the way, which have been resolved amicably through your timely intervention and fruitful suggestions. We take this opportunity to place on record our appreciation for the positive role played by your good office in resolving many of the issues confronting bankers.

02. Sir, we draw your kind attention to a two day strike call given by the four officers’ organisations on 26th and 27th September 2019 in the backdrop of the announcement of Merger of 6 Public Sector Banks with 4 other banks as was announced by Hon’ble Minister of Finance on 30th August 2019. The strike notice served on the authorities (Government of India, and IBA), inter alia, had incorporated certain other pertinent issues too besides the merger of Banks were viz. a) Issuance of Mandate for wage revision by 5 banks to cover all officers; b) 5 day week; c) Pressure on officers to sell the third party products ; d) Revision of Family pension and e) Updation of Pension af ai.

03. On 23rd September, 2019, the representatives of the four officers’ organisations had a purposeful initial interaction with by Or. Madnesh Kumar Mishra, Joint Secretary DFS and subsequently with Shri Rajeev Kumar, the then Secretary, DFS where other senior functionanes of DFS were also present. During the discussions held with the then Secretary, DFS, on 5 day week, it was categorically assured that the demand would be actively considered. Even if ail Saturdays off at that point of time, could not be introduced, an additional Saturday off could well be worked out. Till date, there is no positive response In this regard.

04. As you are well conversant with the present day plight of the citizenry of our nation due fo the pandemic COVID 19, we are of the considered view that with the spike in footfall, bank branches have become a community transmission hub of COVID 19, obviously a matter of serious concern, following the surge of infection amongst the bankers after the implementation of Untock process. Several state governments have woken up to the realization and closed down bank branches on all Saturdays under N.I. Act to ensure that banks are closed on two consecutive days to “Break the Chain”. Further, despite tremendous constraints, the financial army has responded to the call of the nation in a magnificent manner during the period of crisis to render yeoman service with patience and precision. in the process, unfortunately hundreds of bankers have laid down their lives in the line of duty.

05. India is in the midst of digital revolution. As per experts, India is set to leapfrog many advanced countries in this space. Customers in the country are leaning towards digital adoption of financial services faster than previous estimates. There will be a paradigm shift in banking transactions from the brick and mortar banking to digital transactions concept. The PSBs have given priority in the development and expansion of alternate channel. Banks are making, in terms of long term planning, huge investment towards capex for alternate channel like ATM to cope with the digital revolution in financial services in the country. With the ongoing digital drive in the country, the number of users opting for online banking is expected to shore up significantly.

In the above backdrop, we would request your good self to explore introduction of 5 day working week on a pragmatic approach and take a holistic view on the issue in the given situation for a positive catalytic step in the direction of Digital India in conformity with Hon’ble Prime Minister’s vision. A positive move in this regard at this juncture will immensely benefit the entre fraternity of bankers along with the society to effectively combat the contagion. 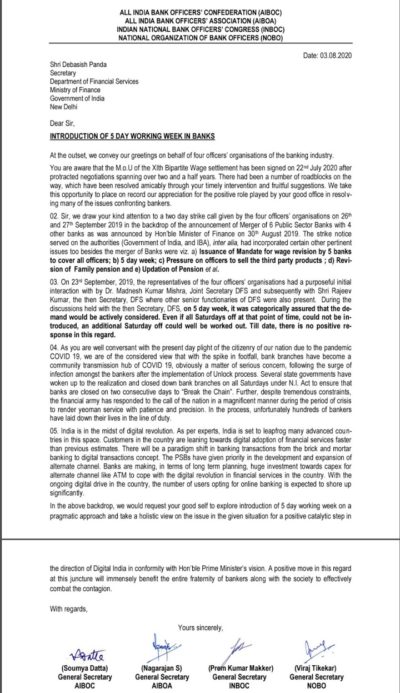