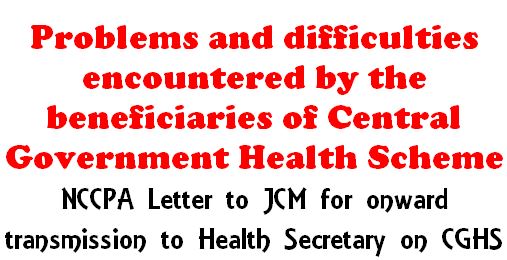 Problems and difficulties encountered by the beneficiaries of CGHS: NCCPA Letter

Problems and difficulties encountered by the beneficiaries of CGHS: NCCPA Letter to JCM for onward transmission to Health Secretary on CGHS

NCCPA has written a letter to Comrade Shiv Gopal Mishra for onward transmission to Health Secretary on CGHS related issues as discussed in the Executive meeting of NCCPA by video conference and provided by affiliates including AIPRPA. The Draft letter is as follows:

Kindly refer to the discussions, we had at the NE meting of the NCCPA, which  you presided over.  On the basis of the feed back, I have prepared a draft letter to be sent to the Secretary, Pension, GOI, New Delhi.  I am sending the same along with.  Kindly go through the same and send the letter to the  Secretary if you find it alright.

Sub: Problems and difficulties encountered by the beneficiaries of Central Government Health Scheme.

We detail hereunder certain issues pertaining to the difficulties encountered by the beneficiaries of CGHS both the pensioners and the working employees.   We solicit your kind attention to the minutes of the last meeting, the JCM Staff Side had with your predecessor when some of the issues were discussed.  It was agreed that the periodical meeting to resolve the problems of beneficiaries of CHGS would be convened to subject these maters to discussion and resolution thereof.  We shall be grateful if such a meeting is convened as early as possible so that these issues along with the pending matters could  be discussed and amicable settlement reached.

4. Many pensioner beneficiaries have complained of the inordinate delay in settling the bills submitted for reimbursement.   It is requested that the Government must fix a time frame say one month  for scrutiny and payment of the bills.  Any delay beyond the stipulated period must bear interest to be recovered from the person responsible for the delay.

5.  In many CGHS dispensaries, the services of a Gynaecologist is seldom available.  It is appreciated that it might not be possible at all time.  In such cases, our suggestion is that the Government should recognise a panel of Gynaecologists  in such towns.  The beneficiaries may be permitted to have consultation with them by payment of the prescribed fees, which might be reimbursed.

6. The CGHS took over the Postal dispensaries . However, there is acute shortage of staff in these dispensaries.  The shortage threatens the very functioning of these units.  It is requested that the concerned Addl. Directors may be permitted to recruit personnel on temporary basis till permanent arrangements are made.

7. The North Eastern Region is a far flung area with difficult terrain with little travel and communication facilities. To cater to the requirement of the pensioners and employees of this vast region, presently there is only one CGHS centre located at Guwahati.  Taking into account the very peculiar situation in this region, the Government may kindly consider setting up dispensaries or CGHS centres in all the State capitals of the NE Region.

10. The wellness centre at Vijayawada, in Andhra Pradesh is presently located in a building owned by the City Corporation.   As part of the renovation exercise,  the space occupied by the CGHS dispensary has become unfit for its functioning.   There is no water supply  and the washrooms are demolished.  The Centre has to be shifted at-least temporarily  and the Pensioners Association at Vijayawada has suggested to shift the dispensary to the vacant BSNL. Quarters.  We request you to kindly direct the concerned Additional Director to make arrangements for the shifting of the dispensary. 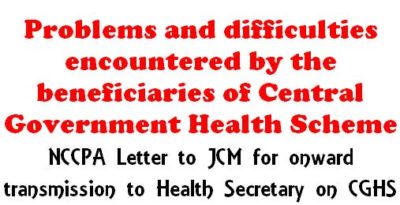 Loading...
Newer Post
Treating the period of absence due to COVID-19 as “Special Casual Leave”: AIRF writes to Railway Board
Older Post
To Finalize Pension Case not go back to a period 24 months preceding the date of retirement for raising observations relating to pay fixation etc