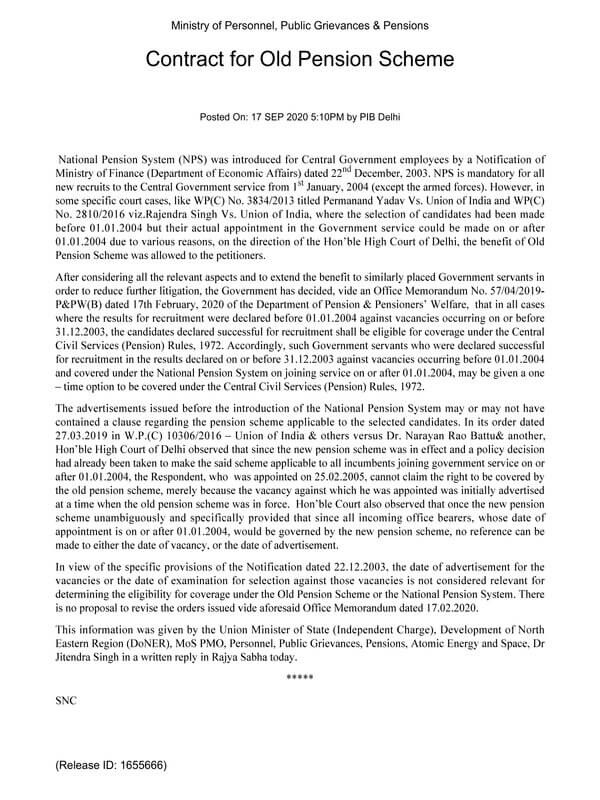 NPS to OPS : One Time Option to be covered under CCS(Pension) Rules, 1972

NPS to OPS : One Time Option to be covered under CCS(Pension) Rules, 1972

National Pension System (NPS) was introduced for Central Government employees by a Notification of Ministry of Finance (Department of Economic Affairs) dated 22nd December, 2003. NPS is mandatory for all new recruits to the Central Government service from 1st January, 2004 (except the armed forces). However, in some specific court cases, like WP(C) No. 3834/2013 titled Permanand Yadav Vs. Union of India and WP(C) No. 2810/2016 viz. Rajendra Singh Vs. Union of India, where the selection of candidates had been made before 01.01.2004 but their actual appointment in the Government service could be made on or after 01.01.2004 due to various reasons, on the direction of the Hon’ble High Court of Delhi, the benefit of Old Pension Scheme was allowed to the petitioners.

After considering all the relevant aspects and to extend the benefit to similarly placed Government servants in order to reduce further litigation, the Government has decided, vide an Office Memorandum No. 57/04/2019-P&PW(B) dated 17th February, 2020 of the Department of Pension & Pensioners’ Welfare, that in all cases where the results for recruitment were declared before 01.01.2004 against vacancies occurring on or before 31.12.2003, the candidates declared successful for recruitment shall be eligible for coverage under the Central Civil Services (Pension) Rules, 1972. Accordingly, such Government servants who were declared successful for recruitment in the results declared on or before 31.12.2003 against vacancies occurring before 01.01.2004 and covered under the National Pension System on joining service on or after 01.01.2004, may be given a one – time option to be covered under the Central Civil Services (Pension) Rules, 1972.

The advertisements issued before the introduction of the National Pension System may or may not have contained a clause regarding the pension scheme applicable to the selected candidates. In its order dated 27.03.2019 in W.P.(C) 10306/2016 – Union of India & others versus Dr. Narayan Rao Battu & another, Hon’ble High Court of Delhi observed that since the new pension scheme was in effect and a policy decision had already been taken to make the said scheme applicable to all incumbents joining government service on or after 01.01.2004, the Respondent, who was appointed on 25.02.2005, cannot claim the right to be covered by the old pension scheme, merely because the vacancy against which he was appointed was initially advertised at a time when the old pension scheme was in force. Hon’ble Court also observed that once the new pension scheme unambiguously and specifically provided that since all incoming office bearers, whose date of appointment is on or after 01.01.2004, would be governed by the new pension scheme, no reference can be made to either the date of vacancy, or the date of advertisement.

In view of the specific provisions of the Notification dated 22.12.2003, the date of advertisement for the vacancies or the date of examination for selection against those vacancies is not considered relevant for determining the eligibility for coverage under the Old Pension Scheme or the National Pension System. There is no proposal to revise the orders issued vide aforesaid Office Memorandum dated 17.02.2020. 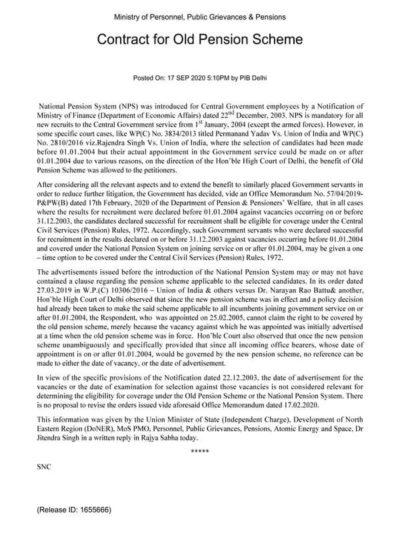