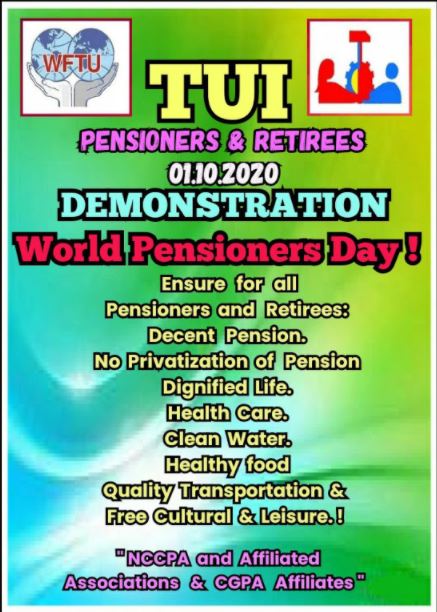 We send herewith the circular letter from the General Secretary, TUI (Pensioners and Retirees) of the World Federation of Trade Unions written in connection with the observance of International day for older persons . Throughout the world the retirees and pensioners observe Ist October as  a day of solidarity with all those who fight against exploitation.  It is also to express solidarity with all old people to ensure that the well-being of senior citizens is the responsibility of the society.  To have a decent standard of living and well looked-after old age is considered an inalienable human right.   Unfortunately few countries and fewer governments have recognised this  right of the old people. The welfare society concept in fact came into being in the capitalist society to ward off the threat from the socialist ideology which was pervading in a major segments of the world in the beginning of the 20th Century.  Now that they could obliterate that threat by foul machinations,  In most of the countries the senior citizens are driven to a wretched life.  The world is now fed with the eulogy of free market, global economy, higher GDP growth rate, mega corporates, super profits and the consequent tickle down effect to serve the people and rescue from the misery and agony.  The greater the inequality , prosperous the country is the new propounded theory.  In our own country, social security and pension payment was considered a drain on the economy and a wasteful expenditure.  The next generation civil servants in the country shall live their retired life in uncertainty and penury as even their hard earned income would have been gobbled up by the so called mega corporations with the tacit help rendered by a Government elected by the same people in the hope that it will look after them.

It was the avalanche of the renewed idea of exploitation that has compelled many countries to make a relook into their social security system and ensure its demolition as has happened in our own country.  They are mocking at the person who made the chair in which the ruler is today sitting.  Observance of this day is to rededicate ourselves to the cause of a struggle to bring in a society sans exploitation; to have a better evening in the life of a human being and a non-dependent existence.

It was the avalanche of the renewed idea of exploitation that has compelled many countries to make a relook into their social security system and ensure its demolition as has happened in our own country.  They are mocking at the person who made the chair in which the ruler is today sitting.  Observance of this day is to rededicate ourselves to the cause of a struggle to bring in a society sans exploitation; to have a better evening in the life of a human being and a non-dependent existence.

The world Federation of Trade Unions and the Trade Union International ( P&R)  have called upon us  to observe 1st October, 2020 in an appropriate manner. Not forgetting that we are in the midst of a deadly disease called corona virus covid 19 pandemic, we call upon our affiliates, State CoCs CGPAs and our members to organise demonstration by holding the placard, (specimen depicted hereunder) at-least for an hour. We know that this is a small step in the direction of the realisation of our dream – a world sans exploitation- but we are confident from our own experience that our small steps early in our life has enabled us to leap into giant strides. 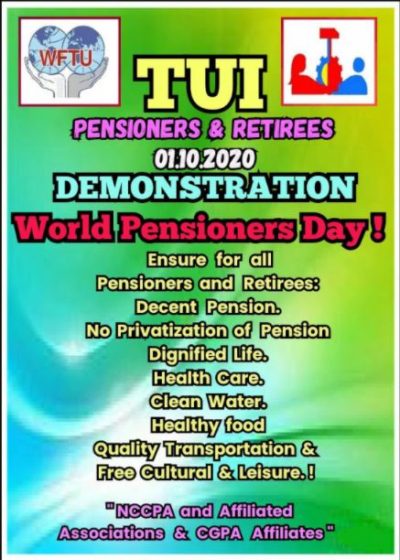 THE TUI OF P&R
PREPARES THE ACTIONS FOR
OCTOBER 1st, INTERNATIONAL DAY OF STRUGGLE
FOR THE RIGHTS OF PENSIONERS AND RETIRED PERSONS (P&R)

October 1st was established by the UN as International Day of Older Persons, or also Day of the Elderly. Since the creation of the International Union of Trade Unions (TUI) of Pensioners and Retirees of the World Federation of Trade Unions (WFTU), this date has become a world day to fight against exploitation, due to the requirement to defend the rights of pensioners and retirees, for a decent life based on the wealth that the working class produces every day with its work.

Once again, from the WFTU TUI of the WFTU, we call all our organizations and friendly organizations to action, in order to make next October 1st a day of vindication and fight for the rights of those who have already reached retirement and for the right to worthily retire for those who have not yet reached this stage of life, whether their activity has been carried out in the formal economy or in the informal economy.

It is an inalienable human right that, after a life of work, people of working class and popular extraction can leave their habitual activity and live with dignity. We qualify a decent life as one in which, thanks to the retirement pension or the income to which one is entitled, sufficient resources are available, such as habitable housing, drinking water, healthy food and health care, culture, leisure and free, quality public commuter transportation. Today there is enough wealth on the planet for all this; it is only enough to distribute it fairly, instead of spending it in imperialist wars.

However, the reality is very different and many people who should have reached retirement must continue working because they do not have access to a sufficient pension, while many of those who have retired cannot have a decent life, a situation that worsens in the case of those who have been unemployed for a time or have worked all or part of their lives in the underground economy or in caring for other people, something that especially affects women.

The real and fundamental cause is the capitalist, unfair and exploitative mode of production, strengthened after the temporary defeat of the socialist countries. Currently, the capitalist governments are promoting new anti-worker measures, against pensioners, the working class and the people. In general, the working life is extended, the years of contribution are increased to be entitled to a pension and the amount received is decreased, all with the final objective of privatizing pensions and converting into another business for financial capital, what should be a universal right. That is the meaning of the existence and extension of the Pension Fund Administration entities (AFP) in numerous countries and the approval, by the European Union, of the so-called European Personal Pension Plan (PEPP), which as TUIof P&Rof the WFTU We have denounced (in Europe the First European Action of the P&R was held on June 17).

In the name of capitalist competitiveness, retired people and pensioners around the world experience the worsening of their living conditions and those of their descendants, while social goods are commercialized and bloody conflicts and wars are promoted (with money from all citizens) imperialists.

Against all this, we call for coordinated international action on October 1. We will fight with unity and common action as the working class, the people and those who suffer capitalist exploitation, for our immediate objectives, but always with the perspective of a society without exploitation, oppression, poverty, war or calamities.

Every October 1st we will demand that a decent job is guaranteed for all people, adapted to their abilities, that allows them to live with dignity and generate a decent pension or, if this fails, that the state budgets assign them a decent pension. without the humiliating adjective of “non-contributory”.

Every October 1st we will go out to the streets to approve, in the laws and constitutions of the countries, the obligation of the states to ensure, through public budgets, pensions that allow all people to retire from their jobs and live worthily.

LET’S ALL PARTICIPATE IN IT!

TUI (International Union of Trade Unions) of Pensioners and Retirees (P&R) of the WFTU.