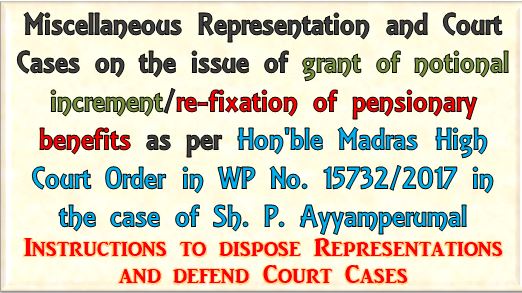 Grant of notional increment/re-fixation of pensionary benefits for retired on 30th June : Instructions to dispose Representations and defend Court Cases

Grant of notional increment/re-fixation of pensionary benefits for retired on 30th June : Instructions to dispose Representations and defend Court Cases

F. No. A-23011/36/2013-Ad.IIA
Government of India
Ministry of Finance
Department of Revenue
Central Board of Indirect Taxes and Customs

Subject: Miscellaneous Representations and Court Cases on the issue of grant of notional increment/re-fixation of pensionary benefits as per Hon’ble Madras High Court Order in WP No .15732/2017 in the case of Sh. P. Ayyamperumal -regarding.

I am directed to refer to CBIC’s letter of even number dated 18.10.2019 (copy enclosed) on the subject mentioned above whereby you have been informed that the competent authority in consultation with Department of personnel and training and Department of Legal Affairs has decided to implement the Order dated 15.09.2017 passed by the Hon’ble High Court of Madras in the matter of WP No. 15732/2017, P. Ayyamperumal Vs. Union of India, in personam and not in rem and, therefore, it is not required to be quoted as precedent in future.

2. It is noted that a number of representations from similarly placed retired officers are being received in the Board. Several court cases in this regard have also been filed at various fora by the retired officers. Therefore, all the cadre controlling authorities were requested, vide letter dated 18.10.2019 referred above, that all the pending/future court cases on the similar issue should be defended/dealt with adequately on the lines as suggested by DoP&T. However, despite this, most of the cadre controlling authorities are forwarding the court cases/representations filed by the similarly placed officers to the Board for providing para-wise comments/necessary action, contrary to the instructions issued vide letter of even number 18.10.2019.

I. As per Rule 10 of the CCS (RP) Rules, 2008, the date of annual increment is fixed uniformly as 1st July of every year. Employees completing six months and above in the revised pay structure as on 1st July are eligible for the next increment. The increment could not be granted to the officer retiring on 30th June, as he was not in service on 1st July.

i. On the issue of date of retirement of government servant, FR 56(a) which inter- alia provides as under may be referred:

ii. Further, so far as P. Ayyamperumal case is concerned, which has been referred in the Writ Petitions, it is stated that

a. The Hon’ble High Court judgment in P. Ayyamperumal case is in personam and is contrary to the personnel policy of Government of India.

b. Further, case of M. Balasubramaniam referred by the Hon’ble High Court in its judgment in P. Ayyamperumal case is related to the Fundamental Rules of Tamil Nadu Gernment whereas P Ayaamperumal case relates to Central Government Rules. As per provisions under Tamil Nadu Fundamental rules 26(a), the annual increments of the Govt. Servants are regulated in four quarters viz. 1st January, 1st April, 1st July and 1st October. And for the Central Govt, it is done
annually on 1st July only.

c. While adjudicating the issue whether a government servant who retires on the last day of the preceding month and whose annual increment falls due on the first of the succeeding month is entitled for sanction of annual increment for the purpose of pension and gratuity, Hon’ble High Court of Andhra Pradesh at Hyderabad in the year 2005 in C. Subba Rao case had inter alia observed the following:

In support of the above observations, the Division Bench also placed reliance on Banerjee case (supra). We are afraid, the Division Bench was not correct in coming to the conclusion that being a reward for unblemished past service, Government servant retiring on the last day of the month would also be entitled for increment even after such increment is due after retirement. We have already made reference to all Rules governing the situation. There is no warrant to come to such conclusion. Increment is given (See Article 43 of CS Regulations) as a periodical rise to a Government employee for the good behavior in the service. Such increment is possible only when the appointment is “Progressive Appointment” and it is not a universal rule. Further, as per Rule 14 of the Pension Rules, a person is entitled for pay, increment and other allowances only when he is entitled to receive pay from out of Consolidated Fund of India and continues to be in Government service. A person who retires on the last working day would not be entitled for any increment falling due on the next day and payable next day thereafter (See Article 151 of CS Regulations), because he would not answer the tests in these Rules. Reliance placed on Banerjee case (supra) is also in our considered opinion not correct because, as observed by us, Banerjee case (supra) does not deal with increment, but deals with enhancement of DA by the Central Government to pensioners. Therefore, we are not able to accept the view taken by the Division Bench. We accordingly, overrule the judgment in Malakondalah case (supra).’

Hence, there is another High Court judgment which lays contrary principles on this issue.

iii. In addition, the following observation of Hon’ble High Court of Delhi while giving its judgment dated 23.10.2018 in the case of UOI and others vs. G.C. Yadav are also noteworthy :
‘So far as the rejection of the Special Leave Petition filed by the Union of India is concerned, the same was by a summary order, and while dismissing the SLP preferred by the Union of India, the Supreme Court observed that it was not inclined to interfere with the impugned Judgment and order passed by the High Court of judicature at Madras on the facts of that case. The Supreme Court did not consider, and did not put its seal of approval on the legal principle involved in P. Ayyamperumal (supra). ‘

III. As far as the case of P. Ayyamperumal is concerned, it is informed that after rejection of SLP filed by Union of India in Hon’ble Apex Court, a review petition against the order dated 23.07 .2018 of Hon’ble Supreme Court in P. Ayyamperumal was filed in the Hon’ble Supreme Court. However, the Hon’ble Supreme Court vide order dated 08.08.2019 dismissed the instant review petition. Since the apex court dismissed the review petition of the department, the competent authority decided to implement the Order dated 15.09.2017 of the Hon’ble High Court of Madras in WP No. 15732/2017, directing to grant one notional increment to petitioner retiring on 30th June for the purpose of pensionary benefits in personam for petitioner only to avoid the contempt proceedings as indicated in the said letter as referred to in para I above.

IV. Department of Legal Affairs, which was also consulted, while tendering advice in the matter of P. Ayyamperumal, has cited the case of Kunhayammed and others vs State of Kerala (2000) 6 SCC 359, wherein the Hon’ble Supreme Court has concluded the following propositions :-

“An order refusing special leave to appeal may be a non- speaking order or a speaking one. In either case it does not attract the doctrine of merger. An order refusing special leave to appeal does not stand substituted in place of the order under challenge. All that it means is that the Court was not inclined to exercise its discretion so as to allow the appeal being filed.

V. Keeping in view the above, DOLA opined that “It is very clear that the judgment of Hon’ble High Court of Madras passed in the matter of Sh. P. Ayyamperumal is in personam and not in m, therefore, the Administrative Department may implement the order in personam.”

VI. Referring to the above principles laid down in Kunhayamrned (supra), the Hon’ble Supreme Court subsequently in the case of Bhakra Beas Management Board v. Krishan Kumar Vij and Anr. (2010) 8 SCC 701, held as under:-

“Thus, according to the law laid down by the Bench of three learned Judges of this Court, it is clear that dismissal of a matter by this Court at the threshold, with non­ speaking order, would not fall in the category of binding precedent. Meaning thereby that the impugned order of the Division Bench can still be challenged on merits by the appellant Board. Thus, the earlier orders of the High Court and this Court passed in Raninder Singh Patpatias case, creates no bar from re-examining the matter on merits.”

VII. From the above, it is clear that doctrine of merger is not applicable to in limine dismissal of SLP by the Hon’ble Supreme Court and would not attract the provisions of Article 141 of the Constitution of India to the said order.

4. In view of above, it is again requested that all the pending/future court cases/representation on the similar issue should be defended/dealt with adequately on the above lines on behalf of all the respondents in terms of Board’s instruction issued vide letter F.No. C-18012/6/2013-Ad.IIB dated 09.05.2016. Reference to the Board should be made only if any additional policy issue is involved.

Yours faithfully,
(Rajendra Kumar)
Deputy Secretary to the Government of India 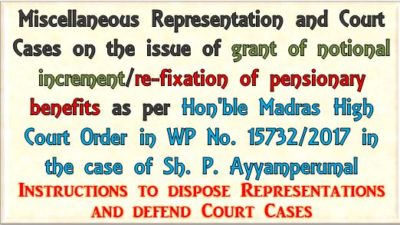