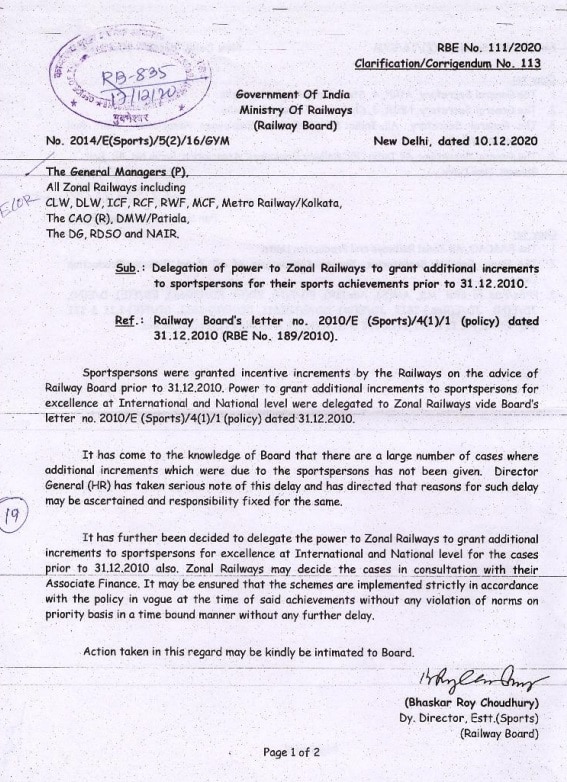 Grant additional increment to sportsperson for their sports achievements: Delegation of power to Zonal Railways: RBE No. 111/2020 Clarification

Grant additional increment to sportsperson for their sports achievements: Delegation of power to Zonal Railways: RBE No. 111/2020 Clarification RBE N

Grant additional increment to sportsperson for their sports achievements: Delegation of power to Zonal Railways: RBE No. 111/2020 Clarification

Sub. : Delegation of power to Zonal Railways to grant additional increment to sportsperson for their sports achievements prior to 31.12.2010.

Sportsperson were granted incentive increments by the Railways on the advice of Railway Board prior to 31.12.2010. Power to grant additional increments to sportspersors for excellence at International and National level were delegated to Zonal Railways vide Board’s letter no. 2010/E (Sports)/4(1)/1 (policy) dated 31.12.2010.

It has come to the knowledge of Board that there are a large number of cases where additional increments which were due to the sportsperson has not been given. Director General (H.R) has taken serious note of this delay and has directed that reasons for such delay may be ascertained and responsibility fixed for the same.

Payment of HRA to the staff posted at Raniganj Railway Station at par with Asansol (UA) (Y class city): Railway Board

It has further been decided to delegate the power to Zonal Railways to grant additional increments to sportsperson for excellence a International and National level for the cases prior to 31.12.2010 also Zonal  Railway may decide the cases in to consultation with their Associate finance. It may be ensured that the schemes are implemented strictly in accordance with the policy in vogue at the time of said achievements without any violation of norms on priority basis in a time bound manner without any further delay.

Action taken in this regard may be kindly be intimated to Board. 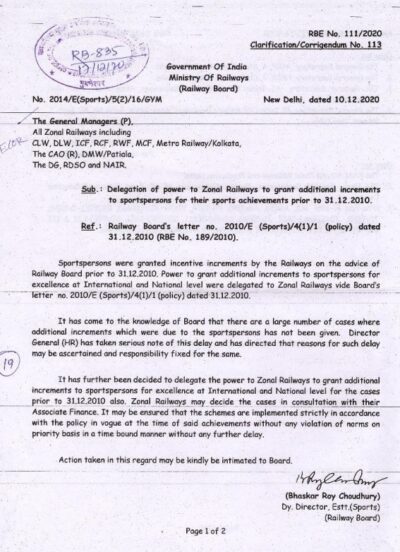