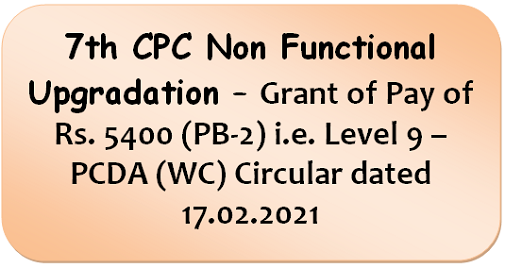 Subject: Implementation of recommendation of 7th CPC- Para 11.12.140- Grant of Grade Pay of Rs. 5400 (PB 2) i.e. Level 9 of Pay Matrix in case of Assistant Accounts Officer of Defence Accounts Department of Ministry of Defence: Grant of Non-Functional Up gradation (NFU).

The CGDA, Delhi Cantt office vide their letter no. AN/XIV/14162/7th CPC/ Vol-II dated 13.11.2020 has intimated that the revised pay scale of the post of Assistant Accounts Officer in Defence Accounts Department would be in Level-8 of Pay Matrix and Level-9 (7th CPC) on completion of 04 years in Grade Pay of Rs. 4800/-(PB-2) Level 8. This is a Non-Functional Up gradation (NFU) which is subject to the following terms and conditions:-

(i) The grant of NFU will be admissible on completion of 4 years of regular service in the cadre from the date of joining as AAO. The aforesaid Non-Functional Up gradation (NFU) to AAQs is effective from 01.01.2016.

(ii) The NFU will be subject to vigilance clearance.

(iii) Benefits of Pay Fixation as per Rule 13 of CCS (Revised Pay) Rules 2016 shall be available at the time of grant of Non-Functional Up gradation to AAQs.

(iv) After the grant of NFU to AAOs in Pay Level-9 and their Pay Fixation under Rule 13 of CCS (RP) Rules 2016, there will be no further pay fixation on promotion.

2. In order to consider the grant of NFU, it is requested to furnish the details of all eligible AAOs who are completing 04 years in the grade pay of Rs. 4800/- upto 30.06.2021 on the under mentioned Performa. The requisite details should reach this office through mail ID pedawcan3 [email protected] latest by 01.03.2021. It may also be ensured that no eligible official is left out from your office/section.

The contents of the circular may please be got noted by all the affected officials whether on leave or Ty.Duty.

The Officer In Charge, IT&S (Local) – For uploading the same on PCDA (WC) Website