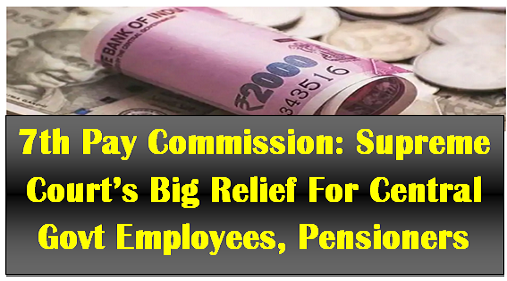 7th Pay Commission: The 2-judge bench of the apex court asked the government to verify if the claim made by an employee or pensioner is in the record of certified doctor or hospital or not.

New Delhi: Giving a big relief to millions of Central Government Employees and retirees, the Supreme Court of India recently ruled that they (employees) cannot be denied reimbursement of medical bills (Mediclaim) if they opted for treatment from a private hospital. Also Read – 7th Pay Commission Latest updates: Your Take-home Salary, PF And Gratuity Likely to Affected From April 1

“A central government employee during service or after retirement can’t be denied the reimbursement of the bill merely on the ground that during a medical emergency he took treatment from a private hospital which is not in the list of the Central Government Health Scheme (CGHS) impaneled hospitals”, a bench of Justice RK Agrawal and Justice Ashok Bhushan asserted.

The court order came on a petition by a retired central government official who had taken treatment from two private hospitals and sought the reimbursement of medical bills. The government had initially refused to reimburse the bill saying that the implant of a CRT-D device was not required.

Option for Calculation of Income Tax under Old Tax Regime or New Tax Regime: Clarification by PCDA &#8211; Message No. 04/2021

For the last six decades, Central Government Health Scheme is providing comprehensive medical care to the Central Government employees and pensioners enrolled under the scheme. In fact, CGHS caters to the healthcare needs of eligible beneficiaries covering all four pillars of democratic set up in India namely Legislature, Judiciary, Executive, and Press. 4

CGHS is the model Health care facility provider for Central Government employees & Pensioners and is unique of its kind due to the large volume of the beneficiary base, and open-ended generous approach of providing health care.

Presently approximately 35 lakh beneficiaries are covered by CGHS in 71 cities all over India and the endeavor is to include more cities to improve the accessibility of the services.