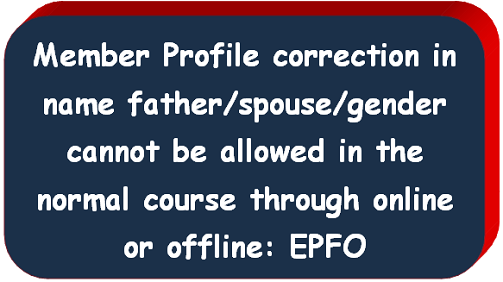 Member Profile correction in name father/spouse/gender cannot be allowed in the normal course through online or offline: EPFO

Member Profile correction in name father/spouse/gender cannot be allowed in the normal course through online or offline: EPFO Circular

For Web Circulation Only

Please refer to the above said subject and circulars cited at ref. no 3 above. In Suppression of previous directions regarding correction of KYC, to the extant it is covered in this circular, following guidelines are issued:

Correction in member profile has been allowed to rectify the errors in name, father/husband name, DOB and gender. However, it has been observed that complete name and profile change has been made in certain cases leading to fraudulent withdrawals. A complete change in the member profile cannot be allowed in the normal course through online or offline process except in extreme situations where it has been proven that the member name has been changed following the due process prescribed in law, or there has been an erroneous upload of member data by the employer, on production of documentary evidence by the member and employer and after due verification.

Accordingly, Minor and Major “correction” are classified as below:

Minor correction: A correction will be considered minor

1. If the correction is related to expanding the name/surname from abbreviation to full name, or vice versa, without changing the first letter if after the correction, the pronunciation of the name doesn’t change. E.g. from R. Kumar to Rakesh Kumar, from V. S. Verma to Vijay Shankar Verma is minor correction. But from R. Kumar to Suresh Kumar is not a minor _ correction.

2. If the father name or husband name is inserted as middle name in AADHAR e.g. Sunita Kumar (s/o or w/o Ramesh Kumar) to Sunita Ramesh Kumar.

3. If it involves only change in surname of female employees after marriage. E.g. from Sunita Sharma to Sunita Singh.

All those cases which do not fall in the category of “Minor correction”, or any correction leading to complete change in name/father name, or where correction in more than two fields are involved.

Authority competent to approve “Minor” and “Major” corrections shall be:

a) For Minor Corrections: APFC/RPFC II
b) For Major corrections: RPFC-I/RPFC-II(OIC)

Major corrections as described above shall not be done in the online process without obtaining proper documentary proof, including explanation from the employer, and verification of the genuineness of the case as deemed appropriate by the RPFC I/RPFC II(OIC). In case of closed establishment where the employer or authorized signatory is not traceable/available, the Authority to attest the joint declaration shall be one among the authorities prescribed in para 10.18 of the MAP Vol. II and the correction shall be made exercising due care and caution and only after due verification of the documentary evidence produced in proof of identity, employment etc.

i. In case the joint declaration is signed by employer the employer should be asked to produce original records such as employee register, increment orders, pay slip, appointment order, any application made to EPF office to correct wrong name in form-23 (PF slip), etc., on the basis of which employer is certifying the change request.

ii. In case of closed establishment, the applicant may be asked to produce evidence such as appointment letter. pay slip, increment order, PF-slip and any application to correct name in form 23.

iii. Such other records as the authority feels required can also be asked. Verification through EO may also be done.

It is further directed that the documentary proof produced by the employee/employer shall be preserved and made available for Audit by the IAP. 100% Audit of such cases may be done by the IAP. CAC may also examine all such cases on regular basis.

(Issued with the approval of competent authority)

Copy for information & necessary to: