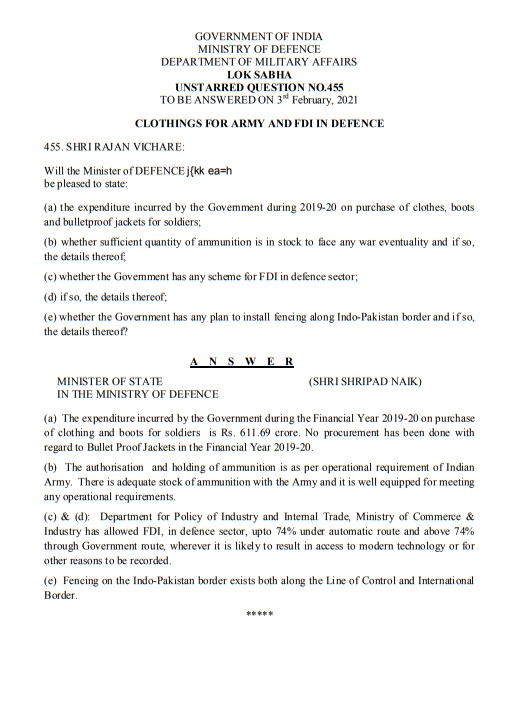 Clothings for Army and FDI in Defence: Expenditure on purchase of clothes, boots and bulletproof jackets for soldiers

Clothings for Army and FDI in Defence: Expenditure on purchase of clothes, boots and bulletproof jackets for soldiers

GOVERNMENT OF INDIA
MINISTRY OF DEFENCE

Clothings for Army and FDI in Defence

Rajan Baburao Vichare
Mohan Mandavi
Will the Minister of

DEFENCE be pleased to state:-

(a) the expenditure incurred by the Government during 2019-20 on purchase of clothes, boots and bulletproof jackets for soldiers;
(b) whether sufficient quantity of ammunition is in stock to face any war eventuality and if so, the details thereof;
(c) whether the Government has any scheme for FDI in defence sector;

(c) & (d): Department for Policy of Industry and Internal Trade, Ministry of Commerce & Industry has allowed FDI, in defence sector, upto 74% under automatic route and above 74% through Government route, wherever it is likely to result in access to modern technology or for other reasons to be recorded.

(e) Fencing on the Indo-Pakistan border exists both along the Line of Control and International Border. 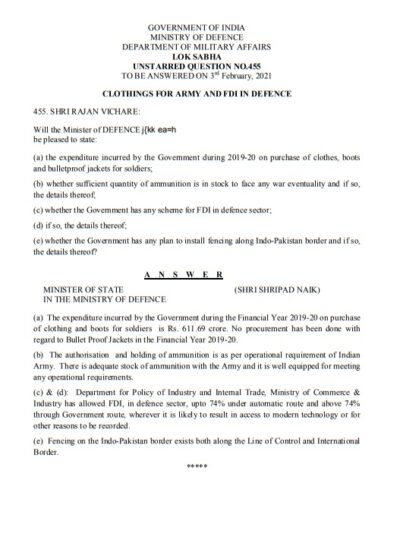 Loading...
Newer Post
Sanctioned Strength of Judges: Supreme Court and various High Courts in the country as on 3 Feb 2021
Older Post
Death of Healthcare Workers due to COVID-19: MoHFW Data