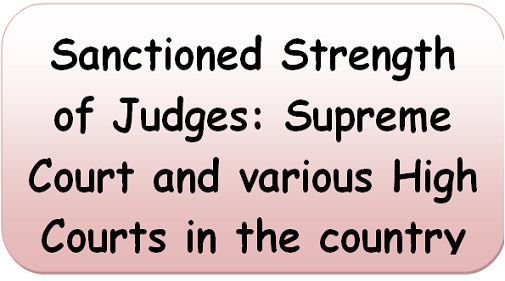 GOVERNMENT OF INDIA
MINISTRY OF LAW AND JUSTICE

Badruddin Ajmal
Will the Minister of

LAW AND JUSTICE be pleased to state:-

e) the total number of vacant posts of Judges in the Supreme Court and the High Courts?

ANSWER
The MINISTER OF LAW AND JUSTICE, COMMUNICATIONS AND ELECTRONICS & INFORMATION TECHNOLOGY

(a), (b) and (e): Statement showing sanctioned strength of Judges, number of male & female Judges and vacancies in the Supreme Court and High Courts is attached at Annexure.

(c) and (d): Appointment of Judges of the Supreme Court and High Courts is made under Articles 124 and 217 & 224 of the Constitution of India respectively, which do not provide for reservation for any caste or class of persons. Hence no class/category wise data is maintained centrally. However, the Government has been requesting the Chief Justices of the High Courts that while sending proposals for appointment of Judges, due consideration be given to suitable candidates belonging to Scheduled Castes, Scheduled Tribes, Other Backward Classes, Minorities and Women to ensure social diversity in appointment of Judges in High Courts.

Statement referred to in reply to parts (a), (b) and (e) of Unstarred Question No. 377 to be answered in Lok Sabha on 03.02.2021 regarding ‘Sanctioned Strength of Judges” by Shri M. Badruddin Ajmal, showing sanctioned strength, no. of male & female judges and vacancies of Judges in Supreme Court and the High Courts.