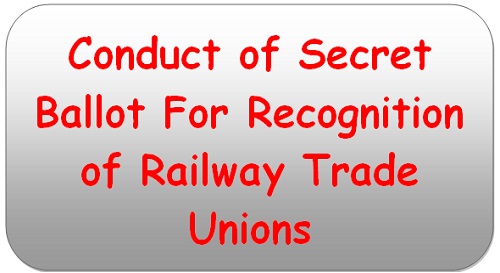 Conduct of Secret Ballot For Recognition of Railway Trade Unions

Conduct of Secret Ballot For Recognition of Railway Trade Unions

GOVERNMENT OF INDIA
MINISTRY OF RAILWAYS

CONDUCT OF SECRET BALLOT FOR RECOGNITION OF TRADE UNIONS

Will the Minister of RAILWAYS be pleased to state:

(a) whether a secret ballot is conducted by Railway administration to recognise railway trade unions registered with it;

STATEMENT REFERRED TO IN REPLY TO PARTS (a) TO (d) OF UNSTARRED QUESTION NO. 584 BY CH. SUKHRAM SINGH YADAV, SHRI VISHAMBHAR PRASAD NISHAD AND SMT. CHHAYA VERMA ANSWERED IN RAJYA SABHA ON 05.02.2021 REGARDING CONDUCT OF SECRET BALLOT FOR RECOGNITION OF TRADE UNIONS.

Adv.(Dr) ShreedharV, Sherigar,: Sir,In connection with the above registered grievance, registration number PMOPG/E/2021/0245068 : F.No. N-11013/1037/2019-NC, you are requested to respond and/ or advise to respond the concerned authority in this regard. This matter is pertaining to the late delivery of Notary certificate. I am from Mumbai, Maharashtra. After a successful result is declared, an appointment letter dtd.4/6/2019 was issued by the Central Cell. Like me, many of the Advocates are waiting for the Certificate of practice which is not received till date. May I request your good selves to look into the matter please,as it is delayed due to COVID pandemic. Regards,Adv.(Dr) Shreedhar Sherigar,High Court Bombay