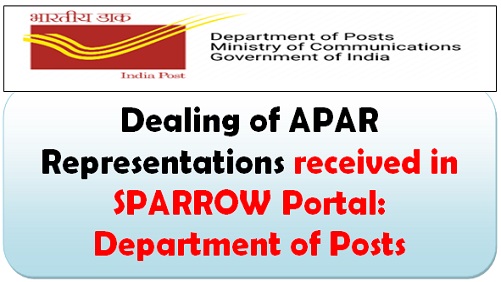 Training to employees to improve performance & maintenance of APAR : Lok Sabha Q&A
Introduction of Reviewing Authority in the APAR format for GP 1900 Level-2 reg. (RBE No.83/2019)
Filing of APAR online from 2016–17: Railway Board Order

This is with reference to online filling of Performance Appraisal Reports (PARs) for all Group ‘A’ IPoS officers of Department of Posts in SPARROW Portal.

2. In this regard, it is to say that Smart Performance Appraisal Report Recording Online Window (SPARROW) portal has been made live from 16th July, 2020 for filling of Annual Performance Appraisal Report (APAR). All Group ‘A’ IPoS officers of Department of Posts except those who are on Deputation have started to fill online PAR through SPARROW portal for the assessment year i.e. 2019-20.

3. Many Circles have inquired about the procedure to be followed for dealing with representations submitted by officers regarding grading/entries in their APARs recorded in SPARROW, subsequent to disclosure of the same to them. It is to inform that the process of dealing with such representations will be the same as was being followed earlier for physical APARs prior to launch of SPARROW. Following procedure will be followed.

a. State Custodian will take printout of the representation and send it to Director (Staff), Postal Directorate for further examination for a decision by the Competent Authority.

Recruitment of Non-gazetted Staff including MTS in the Deptt. of Posts &#038; Telecommunications अराजपत्रित कर्मचारियों की भर्ती

c. As regards officers posted in Postal Directorate, attached Directorates and RAKNPA, Ghaziabad, it will be the responsibility of CS to Member (P) to take printout and forward to Director (Staff).

4. This issues with the approval of Competent Authority .

Loading...
Newer Post
Fixation of pay of Government officials at 18,460 under 6th CPC who were promoted from pre-revised Grade Pay of 4,200/- to 4,600/-
Older Post
Decentralization of procurement of Postal Bags: Department of Posts 03 Feb 2021