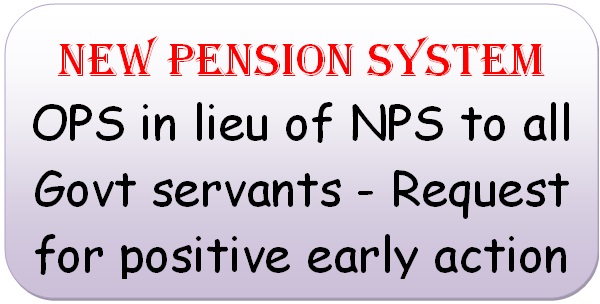 New pension system: Regarding restoration of old pension scheme in lieu of New pension system to all Govt servants who were regularly appointed into service on or after 01-01-2004- Request for positive early action.

Regarding restoration of old pension scheme in lieu of New pension system to all Govt servants who were regularly appointed into service on or after 01-01-2004- Request for positive early action.

With reference to the above mentioned subject and with utmost respect, I am taking this opportunity under your esteemed presence in our historical 39th Biennial Conference and constrained to bring to your kind notice through this appeal that, despite lot of references and deliberations by all recognized service Unions of various ministries of Govt. of India, the competent authority has not taken any favorable decision in the matter so far. Enormous communication; ‘supported by necessary inputs, explaining the ins and outs of old and new pension schemes were unheeded, compelling me to take up the issue with Your Honour, being the Circle Secretary of Maharashtra Postal Circle staff union with a hope that Your Honour may bridge the gap by taking up the important matter at appropriate level.

Pension, indeed, a right, social security and welfare scheme extended to all Govt, Servants, which is otherwise known as a deferred wage. Pension was treated not only as a reward for past service, but with a view to helping the employee to avoid destitution in old age. Thus, the Govt, servants those who were appointed prior to 01-01-2004 were rightly covered under old pension scheme without deducting any monthly contribution from them. However, the scenario has been completely changed w.e.f 01-01-2004 onwards, that Govt. Servants appointed in to service on or after 01-01-2004 were covered by New Pension System with mandatory monthly deduction from their salary. This irked the Govt.servants in a very big way.

‘The Civil servants appointed on or after 01-01-2004 have started comparing their, position with these appointed into service prior to 01-01-2004. The important aspect is that both are doing similar job, having equal role and responsibility, drawing same pay scales, however, the new entrants are deprived from old pension, but certain percentage of their salary has been mandatorily deducted on monthly basis in order to get a meager amount of pension after putting in to more than 35 to 40 Years of service. Under the New Pension System, there is also no provision for Contribution towards General Provident Fund which adds more fuel to the fire, whereas same is available under old pension scheme.

It is quite natural that People Working in a particular organisation, performs same nature of duties with similar role and responsibilities and having equal pay scales, can expect same kind of retirement benefits, respective of their date of entry into the organisation. If certain group of people are given retirement benefits Without any contribution but salary of other groups have been mandatorily deducted on monthly basis is certainly inequality, which is against the principle of natural justice enshrined in our constitution. This will also leads to Division among officers/ officials appointed prior to 01-01-2004 and thereafter, affecting revenue generation of respective Dept which may indirectly associated with our GDP. There is unrest among the personnel appointed on or after (1-01-2004 and no one can deny this because of the reason that, they have been forced to contribute monthly from their salary for getting Pension and also unable to contribute to GPF.

The earlier Government in the year 2003-2004 was very keen to implement the New Pension System, however had not analyzed the amount of disadvantages to be faced by one section of Govt. servants working in the same Department on or after 04-01-2004. By the introduction of New Pension System, principle of equal pensionary benefits for equal work and equal pay has been vitiated. Since its introduction, all staff union under different ministries of Govt. of India have been raised their voices/ concerns through various forums/means, but all in vain. The protest is still going on and there will be no end to it unless the Govt. roll back to old pension scheme from NPS. The apathy of new entrants of Govt. Dept needs to be examined in judicious and humanitarian way. Whether there will be any two yardsticks for judging Govt. servants exercising their legitimate public duties who are governed by same service rules and regulations, and if so, why personnel appointed into Govt. Service on or after 01-01-2004 were deprived of old pension scheme.

If you compare the old and new pension schemes, old pension scheme is more advantageous to all. People can enjoy benefits of pension without mandatory contribution from their salary similar to their seniors who were appointed prior to 01-01-2004. Due to GPF, one can withdraw and take advances from the fund for urgent and essential needs. In fact, this is really an opportunity which is a win- win situation for both Govt. as well as Govt. Servants. The accumulated corpus in the fund can be utilized by the Govt. for various schemes and in case of urgent need ,the official can also use it by way of taking advance or withdrawal from the fund to the extant as envisaged under GPF, are because of these two vital points ie. GPF and mandatory contribution from salary. Thus, the old pension scheme is more beneficial to all Govt. Servants.

In order to mitigate the problem, it is fair enough to constitute an expert committee of few secretaries of Govt. Dept to study, analyse and weigh the merits and demerits of both old and new pension systems on a urgent basis, though the NPS came in to existence since 01-01-2004. There is no harm in taking stock of the situation now also, since the NPS cause disadvantage to one section of Govt. Servants, who were appointed on or after 01-01-2004.

In order to assess the level of hardship faced by the Govt. servants entered the Department on or after 01-01-2004, the above narrations may kindly be looked into by the competent authority with proper perspective and cause to scrap the New Pension System which is indeed disadvantageous to Govt. servants. I, on behalf of the Staff Union of Maharashtra Postal! Circle, approaching to Your Honour that Hon’ble Sir may kindly take up the issue with appropriate niinistry on urgent basis. Hoping for favorable action and for that act of kindness, I shall ever remain grateful to Your Honour on behalf of my union.

A tine of reply and favorable action taken in this regards are highly appreciated.

Thanking You,
With Respectful & Healthy Regards, 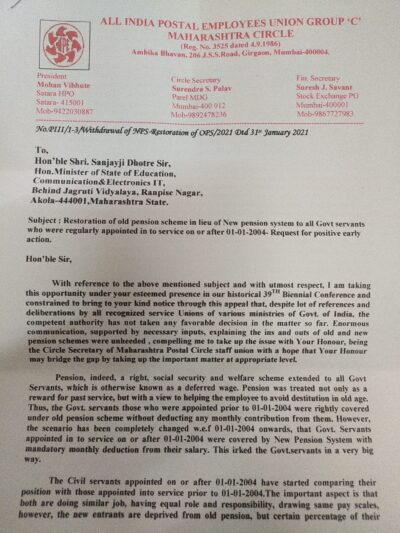 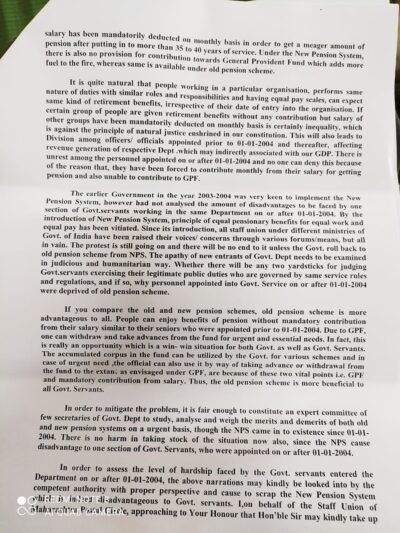 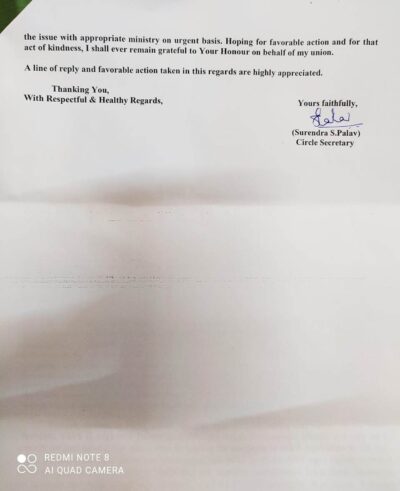 Loading...
Newer Post
Timely Payment of Salaries to Contractual Employees of BSNL संविदा कर्मचारियों को वेतन का समय पर भुगतान
Older Post
Postponement of LDCE for promotion to the cadre of Inspector of Posts for the vacancies of the year 2019 and 2020- DoP