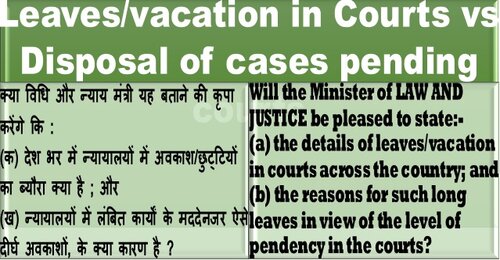 Leaves/vacation in Courts vs Disposal of cases pending in courts: Question raised in Lok Sabha

Leaves/vacation in Courts vs Disposal of cases pending in courts: Question raised in Lok Sabha

GOVERNMENT OF INDIA
MINISTRY OF LAW AND JUSTICE
LOK SABHA

Mala Roy
Will the Minister of LAW AND JUSTICE be pleased to state:-

(a) the details of leaves/vacation in courts across the country; and

(b) the reasons for such long leaves in view of the level of pendency in the courts?

Disposal of cases pending in courts is within the domain of Judiciary. Though Government has no role in disposal of cases in courts, the Central Government is committed to speedy disposal of cases and reduction in pendency. The Government has adopted a co-ordinated approach to assist judiciary for phased liquidation of arrears and pendency in judicial systems, through various strategic initiatives like improving the infrastructure for courts including computerisation, increase in strength of judicial officers/judges and filling up of vacant positions in High Courts/Supreme Court, policy and legislative measures in areas prone to excessive litigation, repeal of outdated and archaic laws, initiatives to fast track special type of cases and emphasis on Alternate Dispute Resolution etc. 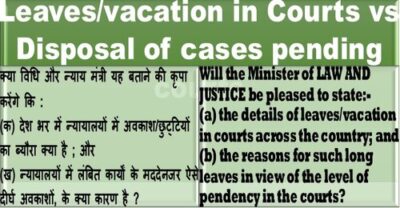