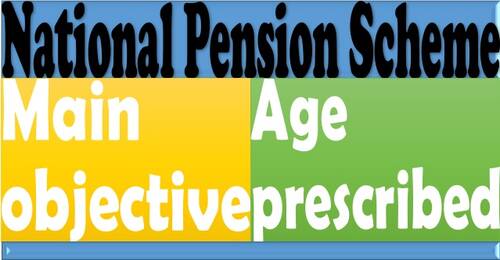 National Pension Scheme: Main Objective and age prescribed. A person after retiring at the age of 60 years can also join NPS

National Pension Scheme: Main Objective and age prescribed. A person after retiring at the age of 60 years can also join NPS GOVERNMENT OF INDIA MIN

National Pension Scheme: Main Objective and age prescribed. A person after retiring at the age of 60 years can also join NPS

Will the Minister of FINANCE be pleased to state:-

(a) the main objective of National Pension Scheme;

(b) the age prescribed for availing the benefit of said scheme;

(d) whether this scheme has also been implemented in States and if so, the details of the services provided in Gujarat State so far?

The Minister of State (Finance)

(a) The National Pension System (NPS) was introduced by the Government of India to replace the defined benefit pension system. NPS was made mandatory for all new recruits to the Central Government service from 1st January, 2004, (except the armed forces in the first stage) and has also been rolled out for all citizens with effect from 1st May, 2009, on voluntary basis. The Government had made a conscious move to shift from the defined benefit, pay-as-you-go pension scheme to defined contribution pension scheme, NPS, due to rising and unsustainable pension bill. The transition aimed at freeing the limited resources of the Government for more productive and socio- economic sectoral development.

(b) NPS is open for subscription to all citizens of India, resident as well as non-resident, aged between 18- 65 years. A person after retiring at the age of 60 years can also join NPS and contribute till the age of 65 years.

(c) All citizens of the country, resident as well as non resident, aged between 18-65 years can subscribe to NPS, and can avail the following benefits under NPS:

ii. Deduction under Section 80C for contribution made to Tier II NPS account by Central Government employees for a fixed period of not less than three years, is allowed.
iii. In accordance to Section 10(12A) of the Income Tax Act, 1961, the entire 60% amount withdrawn as lump sum is tax-free.

iv. Partial withdrawal up to 25% of subscriber’s own contributions before attaining age of superannuation is allowed, subject to certain conditions.

v. Transparency and portability is ensured through online access of the pension account by the NPS subscribers, across all geographical locations and portability of employments. 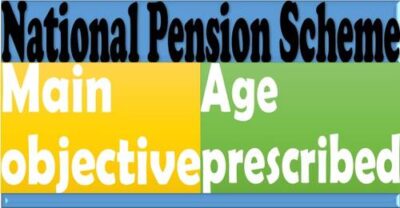