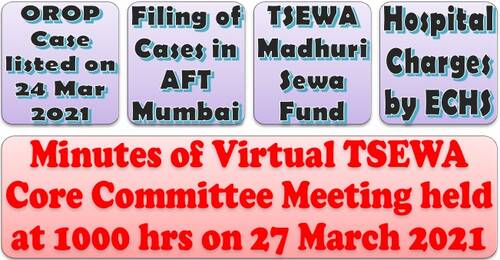 The President welcomed all present in the meeting and thanked them for their efforts to attend the virtual meeting. He requested the General Secretary to commence the proceedings.

Item No. I – OROP Case: The General Secretary informed that TSEWA has received a reply from Min of Defence on 18 March 2020, to our letter dated 24 Nov 2020. The reply was a typical bureaucratic one which said that OMJC Report was submitted by Justice L Narasimha Reddy on 26 Oct 2016 and that it was referred to the committee for detailed examination. He requested the Core Committee to consider sending a letter to Hon’ble Justice Dr Chandrachud of the Supreme Court to deliver the judgement in the OROP case filed by IESM at the earliest, with a copy to the three Service Chiefs, RM, FM, PM and the President of India. He further informed that the case filed by IESM was listed on 24 Mar 2021 but no arguments were done due to paucity of time and other urgent cases. The next date of hearing is 07 Apr 2021.

Decision. It was decided that the matter be left with the President Legal Division to pursue the case.

Item No. II – Filing of Cases in AFT Mumbai: The General Secretary informed that the rates quoted by Shri YP Singh to take up TSEWA cases in Mumbai AFT are too high. Cmde KS Sandhu informed that he has explained to Advocate Shri YP Singh, about the details of fees being paid by TSEWA for AFT Cases filed in other courts. Brig SKS Rana, VSM, President, Legal Division interacted with him and found him to be quite knowledgeable.
Decision. It was decided that the President Legal Division pursue the matter with Shri YP Singh and finalise the rates and term and conditions.

General Secretary informed that, he is in no way involved in the Charity Activities performed by TSEWA Charity Division headed by Cmde Sudheer Parakala. Further, he explained how the clause of charity for Civilians was thrust by IT Commissioner at the time of granting exemption under Section 12 A. However, he expressed his concern that students from only one College viz: Railway Degree College, Secunderabad were beneficiaries and other colleges were not considered..

Cmde Sudheer Parakala, Chairman, Charity Division has explained that Col Nagesh Gupta is a 94 year old veteran, staying in US, and has requested TSEWA to help him in finding suitable meritorious students at the earliest to utilize Madhuri Sewa Fund. He explained that a detailed mail was sent to TSEWA State Presidents to send the recommendations but in the absence of any recommendations, civilian children from Railway Degree College, Secunderabad were considered as recommended by Dr Bhashyam, Principal who is related to Lt Col G Parvathesam. He reiterated that there was no favouritism and that the beneficiaries really deserved financial assistance. He also emphasized that all recommendations made by State Presidents should follow the checklist/Guidelines circulated a number of times before sending the recommendations since the cases are examined by IT Officials.

Lt Col G Parvathesam clarified further that the students identified are from four different colleges and not from a single college. Due to the prevailing pandemic conditions, we could not ascertain the economic condition of the students by physical verification at their residences. He assured the Core Committee that the students were from very poor back ground and essentially needed urgent help to pay the college fees.

Cmde Kuldip Singh Sandhu, President, Mumbai Metro, TSEWA elucidated at length the method of charity and appreciated that Charity Div approved and helped a divorced daughter of DAD employee whom he recommended. He further suggested TSEWA should be more flexible and respect the wishes of donor who wants to help out somebody. As long as poor and meritorious children get financial assistance, it should not matter whether they are from school / college or different schools / colleges. That should be acceptable to all. The credit for such help goes to TSEWA and in future more and more donors will send their contributions to TSEWA. TSEWA he further added is respected by many veterans for the good work being done.

Brig CS Vidyasagar appreciated the efforts of Charity Division of TSEWA for providing the selfless services and in identifying and helping the poor students. He explained the need of considering the wishes of donors as long as it does not interfere with the functioning of TSEWA. He further added that all TSEWA executives are serving the organization devotedly and there is no scope of doubting their integrity and selfless services.

Item No. IV – Receipt of Donation by TSEWA: Maj Gen SN Mukherjee, President, TSEWA, West Bengal suggested that the donations from the donors should be received by TSEWA to extend the facility of Tax exemption to the donors. TSEWA should not ask the donors to deposit the donations directly into the beneficiary’s account.

Item No. V – Reimbursement of Hospital Charges by ECHS: Maj Gen SN Mukherjee has pointed out that the ESM are not able to get reimbursement of Hospital Charges in full, when they are admitted in non-empaneled Hospital.Col Srikantha Seshadri, member of Oversight Committee of ECHS has explained that the patient admitted in a Non – empaneled hospital has to intimate the ECHS Polyclinic within 2 days from the date of admission and submit the bills within 90 days from the date of discharge. Patients are eligible for full reimbursement once the bill is sent for reimbursement through proper channel to MOD and approved by it. He added further that unfortunately the MOD has been found to be not so helpful to the ESM in this matter.

The President informed of latest judgment of Hon’ble Supreme Court in the case of possibly a member of CGHS who got admitted in a non-empanelled hospital. His bill for reimbursement was disallowed. He challenged the decision of CGHS authorities right upto Hon’ble Supreme Court. The Hon’ble Surpeme Court upheld the argument of the petitioner and directed CGHS to reimburse the expenditure incurred in the non -empanelled hospital. However, it is better to inform OiC ECHS Polyclinic within 48 hrs of admission in a non – empanelled hospital. The reimbursement is limited to CGHS rates. Maj Gen Shibnath Mukherjee informed that some of the ECHS members admitted in non-empanelled hospitals get only 60% of expenditure incurred. The President cited example of some of the empanelled hospitals in Hyderabad and Secunderabad when some of the ECHS members get admitted for certain medical procedures like heart valve replacement etc, the hospital informs the patient that CGHS rate for that medical procedure is less than what the hospital charges and ask him to pay the balance. Though this is not ethical, the patient or his spouse have no alternative but to cough up the balance amount to get the medical treatment. These empanelled hospitals after accepting the rates of CGHS indulge in such practices.

Item No V- Financial Assistance: WO Thiruchelvam, President, TSEWA informed that a case he sent to help out a widow with three unmarried daughters was not actioned upon. Lt Col G Parvathesam, Treasurer, informed that he himself went and met the old lady and her daughter in Secunderabad to check on ground the economic condition of the family. They have some dispute on ownership of an ancestral house. The case was considered by the Charity Division and sum of Rs 25,000 was paid to her.

On this WO Thiruchelvam said that the case he sent 3 years back is for a widow in Tamilnadu and not in Secunderabad. On this the President suggested to WO Thiruchelvam to remind the Charity Div. As far his knowledge goes, Charity Div never turned down any proposal from any State Presidents of TSEWA who sent all documents required. It is very essential to check the genuiness of the case on ground as funds available are very limited. He gave an example of Smt Indira Arunachalam of Mumbai on the recommendation of Cmde Kripal Sandhu, President, TSEWA, Mumbai Metro got Rs 25,000 twice. She is the divorced daughter of Mr Arunachalam who retired from PCDA (Navy) Mumbai. TSEWA helped those dependents of Def Accts Dept also when their own Department did not help the dependent of their own employees. He further cited the case of Reservist Mathew from Kerala who on recommendation of Lt Gen Vinod Nayanar of Kannur was given Rs 25,000 for purchase of cow and second time similar amount was sent to him as son of Reservist Mathew was found to be medically unwell.

Cmde Sudheer Parakala, Chairman of Charity Div added that in few cases documents are not received but only an email saying the case be considered and financial assistance be rendered. He further stated that since we got 12(A) and 80(G) all our financial assistance are scrutinised by Income Tax department hence documents are necessary before financial assistance is rendered. He stated that it is not possible for Charity Div based in Hyderabad to go all over the country to check the authencity of the case. Therefore the State Presidents have to take the initiative to check on ground the genuineness of the case and send all the documents which have been sent to them time and again.

Loading...
Newer Post
Guidelines to prevent incidents of Crime against Women in trains and in railway premises: Railway Board Security Circular No. 02/2021
Older Post
President’s Police Medal (PPM) and Police Medal (PM) on the occasion of Independence Day 2021