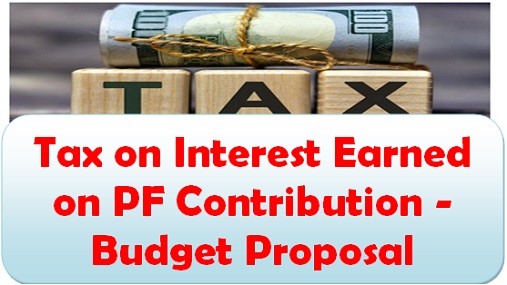 GOVERNMENT OF INDIA
MINISTRY OF FINANCE DEPARTMENT OF REVENUE

2311. SHRI V. VIJAYASAI REDDY:
Will the Minister of Finance be pleased to state:

(a) the details of the budget proposal to impose a tax on interest earned on PF contributions above 2.5 lakhs per year;

(b) whether such a measure would hurt employees who save money for education marriage of their children, etc.;

(c) whether the rate of interest is also consistently coming down on EPF from 9.5 per cent in 2010 to 8 per cent now;

(d) if so, whether Government will consider increasing the limit to 10 lakhs and imposing the tax only when contribution exceeds 10 lakhs; and

(e) if not, the reasons therefor?

(a) The Finance bill, 2021 has proposed to insert proviso to clause (11) and clause (12) of section 10 of the Income tax Act, 1961 (“the Act”) providing that the provisions of these clauses shall not apply to the interest income accrued during the previous year in the account of the person to the extent it relates to the amount or the aggregate of amounts of contribution made by the person exceeding two lakh and fifty thousand rupees in a previous year in that fund, on or after 1st April, 2021, computed in such manner as may be prescribed.

(b) This proposal was introduced as it has been observed that some employees are contributing huge amounts to these provident funds and entire interest accrued/received on such contributions is exempt from tax under clause (11) and clause (12) of section 10 of the Act. This exemption was found to be inequitable as the exemption without any threshold benefits only those who can contribute a large amount to these funds as their share. Therefore, the proposed amendments were inserted in the Finance Bill, 2021 to limit the benefits of clause (11) and clause (12) of section 10 of the Act.

(c) The rate of interest to be credited to EPF members ‘ accounts is based on all Incomes and Liabilities for the particular financial year as per Para 60(4) of the EPF Scheme 1952. There is no fixed/standard rate of interest from which the declared EPF interest rate can be compared to arrive at gain/loss to employees. The declaration of EPF Rate of Interest is a dynamic exercise depending upon the earnings of the particular year.