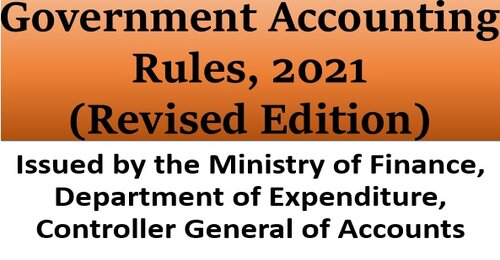 Issued by the Ministry of Finance,
Department of Expenditure,
Controller General of Accounts

3 Articles of the Constitution etc. to be kept in view in devising the form of accounts

CHAPTER 2 – GENERAL OUTLINES OF THE SYSTEM OF ACCOUNTS

7. Agreement of the Central Government with the Reserve Bank

9-11. Accounts of State Governments with the Bank

13 Transactions of the other Governments, including Central Government in State Treasuries

16. Accounts between different Accounts Offices of the Central Government

17 Authorities responsible for the preparation of Annual Accounts of the Central Government, State and Union Territories Governments

CHAPTER 3 – BASIC STRUCTURE OF THE FORM OF ACCOUNTS

22. Currency in which accounts are kept

24. Sectors and sub-Sectors of Accounts

25. Allotment of Code to each Major head and range of Code numbers

27. Classification of expenditure as “Charged” or as “Voted”

28. Classification of transactions in accounts

35. Classification and accounting of recoveries of overpayments

38. Criteria for writes off of balances from Debt, Deposit, Suspense and Remittance Heads closed to balance and classification thereof in accounts

CHAPTER 4 – CRITERIA FOR RECOVERY OF CHARGES FOR SERVICES RENDERED OR ARTICLES SUPPLIED BY GOVERNMENT DEPARTMENTS.

CHAPTER 5 – CLASSIFICATION OF RECOVERIES OF EXPENDITURE IN GOVERNMENT ACCOUNTS

53. Classification of recoveries made from non-government parties and other Governments, including Government outside India

54. Classification of recoveries made by one department from another department of the same Government

55. Classification of recoveries of expenditure on works in progress and transactions of stock and other suspense account

58. Classification of loss etc. of receipts

60. Classification of losses or deficiencies of cash in hand whether in treasury or in departmental charge

61. Classification of irregular or unusual payments

63. Incidence of certain charges and receipts between Governments

66. Pay and Allowances (other than Travelling Allowance) of Government servants

68. Contributions made by or to Government

69. Classification of transactions under “Civil Advances”

70. Classification of transactions under “Suspense”

71. Sale-proceeds of Government land and buildings

73, Cost of Survey of India and other scientific parties accompanying a Military Expedition

APPENDIX-1 Articles of the Constitution and Sections of the Union Territories Act, 1963 relevant to the Form of Accounts

APPENDIX-2 Organisation of the Controller General of Accounts

APPENDIX-3 Sections 10,11 and 22 of the C. & A.G’s. (Duties, Powers and Conditions of Service) Act, 1971 and orders issued by the President in exercise of the powers conferred by sub-section 1 of Section 10 and first Proviso to Section 11 thereof 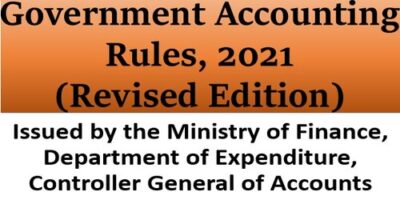