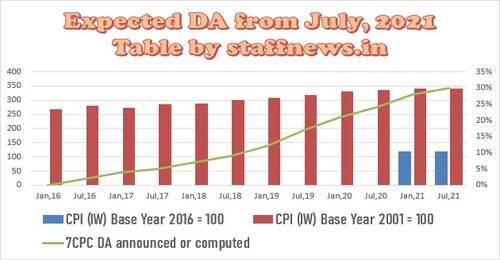 The Labour Bureau has publishes the All India Consumer Price Index for Industrial Workers (AI CPI-IW) for the month of March 2021. The index increased by 0.6 points and stood at 119.6 (one hundred nineteen and point six). On 1-month percentage change, it increased by 0.50 per cent with respect to previous month whereas there was a decline of 0.61 per cent between corresponding months a year ago.

The increase is a minor one and will not impact the Dearness Allowance considerably, the CPI-IW for the month of March 2021 will be used for the calculation of the Dearness Allowance from July 2021 and three more figures are required for this. The government has frozen the DA till June 2021. Hence it is expected that the Hike DA will be available from the month of July 2021 or even earlier. A rough estimation suggests it will be somewhere around 30% to 31%.  With this three months figure it is now clear that rate of DA from July, 2021 will not be less than 30% and not be exceed 31% mark. 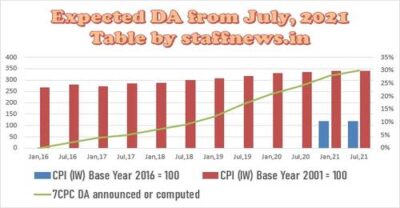 Loading...
Newer Post
Temporary Engagement of Additional Contractual Staff Over and Above Authorisation for High Pressure ECHS Polyclinics
Older Post
Payment of Immediate relief to family of an employee who dies while in service in cash: FinMin OM 30.04.2021