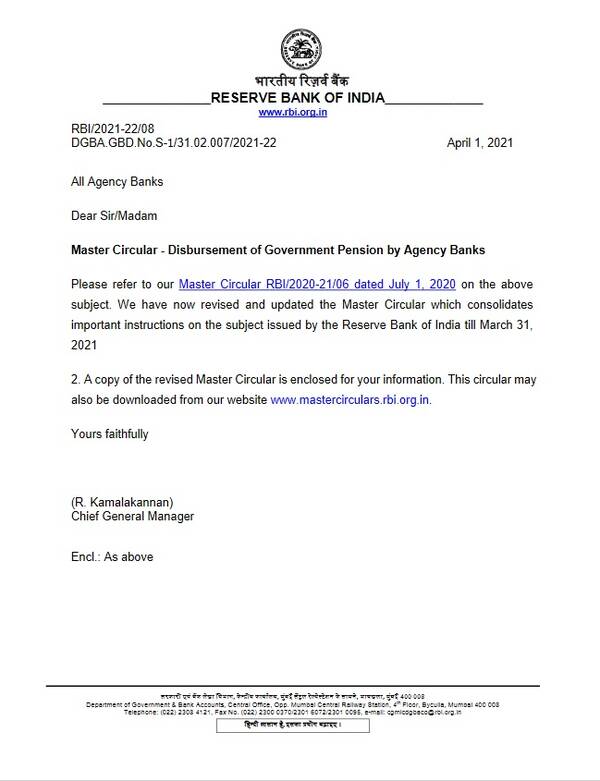 Please refer to our Master Circular RBI/2020-21/06 dated July 1, 2020 on the above subject. We have now revised and updated the Master Circular which consolidates important instructions on the subject issued by the Reserve Bank of India till March 31, 2021

2. A copy of the revised Master Circular is enclosed for your information. This circular may also be downloaded from our website www.mastercirculars.rbi.org.in.

Payment of pension to retired government employees, including payment of basic pension, increased Dearness Relief (DR), and other benefits as and when announced by the governments, is governed by the relevant schemes prepared by concerned Ministries/Departments of the Government of India and State Governments. This Master Circular consolidates important instructions on the subject issued by the Reserve Bank of India till March 31, 2021 (listed in Appendix). It does not replace or supersede any existing government instructions on the matter. The instructions issued by Pension Sanctioning Authority of the Central and State Governments and circulated by RBI in the past will continue to remain in operation subject to changes being made by the competent authority. In case of any doubt or apparent contradiction, agency banks may be guided by the relevant government instructions. Contents of various circulars issued in this connection by the Reserve Bank of India are summarized here under.

2. In order to obviate the time lag between issue of DR orders and payment of DR to the beneficiary and to render expeditious service to senior citizens, the following actions are required to be taken:

It has been decided to discontinue the procedure of forwarding government orders in respect of dearness relief etc. to pension paying agency banks. Agency Banks may, therefore, act on the copies of government orders supplied by government to them through post, fax, e-mails or by accessing from the website and authorize their pension paying branches to make payments to the pensioners immediately.

All agency banks are advised to scrupulously follow all the guidelines/instructions contained in various notifications of Government (Central as well as States) and take necessary action immediately without waiting for any further instructions from RBI.

3. The pension paying banks will credit the pension amount in the accounts of the pensioners based on the instructions given by respective Pension Paying Authorities.

5. If the excess/wrong payment to the pensioner is due to errors committed by the government, banks may take up the matter with the full particulars of the cases with respective Government Department for a quick resolution of the matter. However, this must be a time bound exercise and the government authority’s acknowledgement to this effect must be kept on the bank’s record. The banks may take up such cases with government departments without reference to the Reserve Bank of India.

6. In order to take care of problems/ difficulties faced by sick and disabled pensioners in withdrawal of pension / family pension from the banks, agency banks may categorise such pensioners as under:

7. With a view to enabling such old/sick/incapacitated pensioners to operate their accounts, banks may follow the procedure as under:

8. Accordingly, the agency banks are requested to instruct their branches to display the instructions issued in this regard on their notice board so that sick and disabled pensioners could make full use of these facilities. Agency Banks are also advised to strictly implement the instructions issued by RBI regarding the facilities to be provided to the sick and disabled persons and sensitise staff members in the matter and to refer to the FAQs on pension disbursement hosted on our website www.rbi.org.in in case of any doubt.

Continuation of either or survivor pension account after death of pensioner

11. There have been complaints that life certificates submitted over the counter of pension paying branches are misplaced causing delay in payment of monthly pensions. In order to alleviate the hardships faced by pensioners, agency banks were instructed to mandatorily issue duly signed acknowledgements. They were also advised to consider entering the receipt of life certificates in their CBS and issue a system generated acknowledgement which would serve the twin purpose of acknowledgement as well as real time updation of records.

12. Single Window System was introduced to facilitate prompt settlement of reimbursement claims and reconciliation. The underlying objective is to make each pension paying bank responsible in its own right to effect settlement without the intervention of RBI Offices or SBI (at District Headquarters) in the process eliminating cause of delay in reimbursement claims.

13. All agency banks may issue instructions to their dealing branches to adhere to the recommendations of the Prabhakar Rao Committee relating to pension payments. A checklist may be provided to the inspecting officers/auditors, which may at a minimum include the items given in Annex 1. Agency banks may also instruct their internal auditors/inspectors to comment on the quality of customer service in their reports which may be made available to Reserve Bank’s inspecting officers, as and when they visit the branches.

14. Grievances of pensioners are not being addressed properly at the branch level especially after the setting up of Centralised Pension Processing Centres (CPPCs). To provide hassle free service to the pensioners, there should be a forum for regular interaction and settlement of grievances. Accordingly, agency banks should appoint one/two nodal officers at each Region/Zone for monitoring the resolution of grievances of pensioners on regular basis and the GM/CGM concerned should review the position at monthly intervals

15. At locations outside the CPPCs, there should be designated nodal officers for pension related complaints who should be easily accessible to pensioners and who should hold regular meetings at different locations in their jurisdiction on the lines of Pension Adalat. Each bank should establish toll free dedicated pension line manned by trained persons with access to the database to answer queries, note down and redress complaints.

16. Following several complaints from pensioners alleging inordinate delay in disbursing revised pension and arrears, agency banks are advised as under:

Pension paying banks should compensate the pensioner for delay in crediting pension/ arrears thereof at a fixed interest rate of 8 per cent per annum for the delay after the due date of payment and the compensation shall be credited to the pensioner’s account automatically without any claim from the pensioner on the same day when the bank affords credit for revised pension/ pension arrears, in respect of all delayed pension payments made since October 1, 2008.

Pension paying banks have been advised to put in place a mechanism to obtain immediately the copies of pension orders from the pension paying authorities directly and make payments without waiting for receipt of instructions from the Reserve Bank of India so that pensioners should get benefits announced by the Governments in the succeeding month’s pension payment itself.

When the agency bank is calculating pension, the branch should continue to be a point of referral for the pensioner lest he/she feel disenfranchised.

All branches having pension accounts should guide and assist the pensioners in all their dealings with the bank.

Suitable arrangements should be made to place the arithmetic and other details about pension calculations on the web, to be made available to the pensioners through the net or at the branches at periodic interval as may be necessary and sufficient advertisement is made about such arrangements.

All claims for agency commission by banks in respect of pension payments must be accompanied by a certificate from ED/CGM in charge of government business that there are no pension arrears to be credited/ delays in crediting regular pension/arrears thereof.

All agency banks disbursing pension are advised to provide considerate and sympathetic customer service to the pensioners, especially to those pensioners who are of old age.

Internal inspections should assess branch performance in servicing pensioner customers. In this regard, the following may be ensured:

1. A specific questionnaire covering all aspects of pension payment may be devised for use during inspection of pension paying branches.

2. Inspecting officers may also, during inspections, call up pensioners at random and enquire about their satisfaction with pension-related services.

These include the following:

Whether the branch manager has structured interaction with a cross section of pensioners serviced at the branch on quarterly basis, where the number of pensioners of all governments and departments exceeds affixed number, say, 100 or 200.

Whether nominations have been obtained for all pension accounts.

Whether pension accounts have been converted into joint accounts wherever applicable.

Whether the bank branch has an effective complaint redressal mechanism and the complaints of pensioners are attended promptly and their grievances redressed expeditiously.

Whether the pension is credited to pensioner’s account during the last four working days of the month except for the month of March for which pension is to be credited on or after first working day of April.

Whether paper tokens in acknowledgement of cheques presented are invariably given by the tax collecting branches.

Whether the stamped challans are kept in the custody of bank’s staff and handed over to the concerned tax payer only on production of the paper token. 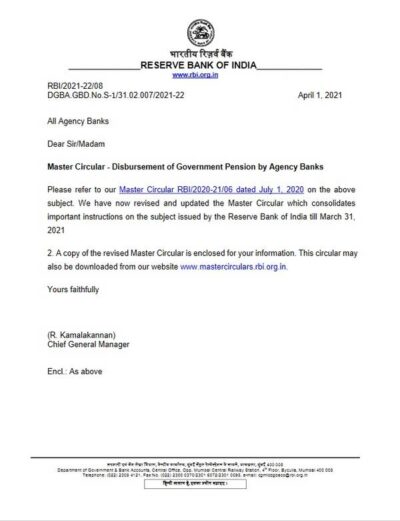