All Secretaries of Ministries/Departments,
Govt. of India.

2. To ensure that this digital e-commerce portal for procurement of goods and services is appropriately utilized by all the Ministries/Departments , it has been decided, with the approval of the competent authority, that a reflection of the work done through GeM by the Officer Reported Upon (ORU) shall be made in the APAR of All India Service officers working at Centre in all the Ministries/Departments of Government of India.

4. The Reporting and Reviewing officers, shall, in general, while recording the numerical grading under “Assessment of work output” “Assessment of Personal Attributes” and “Assessment of Functional Competency” in the APARs, shall wherever applicable, take into account the performance of the ORU for procurement of goods & services through GeM, in accordance with the extant instructions in force during the period of report. Also, the remarks recorded by the ORU in Self-appraisal against “Tasks to be performed”, “Deliverables” and “Actual Achievement” on procurements made (as mentioned at para 3 above) , may specifically be taken into account by the Reporting and Reviewing officers, while according numerical grading for items such as “Accomplishment of planned work” under “Assessment of work output” and ” Knowledge of laws/rules/procedures/IT skills and awareness of the local norms in the relevant area” of “Assessment of Functional Competency ”. A reflection of the performance of the ORU with reference to procurement through GeM or otherwise may also be recorded by the Reporting Officer in Pen Picture of the ORU.

5. The above instructions would be applicable for APAR from the reporting year 2020-2021.

6. All Ministries/Departments are requested to bring the above instructions to the notice of all the officers under them for strict implementation . 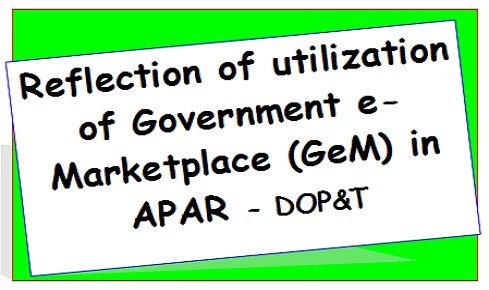