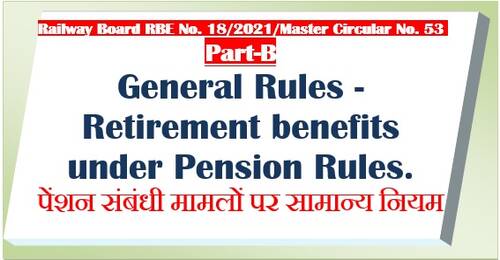 Retirement gratuity or death gratuity – (1) (a) In the case of a railway servant, who has completed five years’ qualifying service and has become eligible for service gratuity or pension under pension rule, shall, on his retirement, be granted retirement gratuity equal to one fourth of his emoluments for each completed six monthly period of qualifying service subject to a maximum of sixteen and one-half times the emoluments and there shall be no ceiling on reckonable emoluments for calculating the gratuity. (b) If a railway servant dies while in service, the amount of death gratuity shall be paid to the family in the manner indicated in the Table below:

(iv) Service Gratuity- In the case of a railway servant retiring in accordance with the provisions of pension rules before completing qualifying service of ten years, the amount of service gratuity shall be calculated at the rate of half month’s emoluments for every completed six-monthly period of service

View: Pension Scheme on Railways and Pension options for the employees governed by Provident Fund Scheme – Part A – Master Circular

where a railway servant dies,-(a) after completion of one year of continuous service; or

(b) before completion of one year of continuous service, provided the deceased railway servant concerned immediately prior to his appointment to the service or post was examined by the appropriate medical authority and declared fit by that authority for railway service; or

(c) after retirement from service and was on the date of death in receipt of a pension, or compassionate allowance, the family of the deceased shall be entitled to family pension under the Family Pension Scheme for Railway Servants, 1964, the amount of which shall be determined at a uniform rate of thirty per cent. of basic pay. The upper ceiling on family pension will be 30% of the highest pay in the Government i.e. Rs. 2, 50, 000/­ with effect from 01.01.2016.

Restoration of commuted pension– The commuted amount of pension shall be restored on completion of fifteen years from the date the reduction of pension on account of commutation becomes operative.

A pensioner who has commuted a portion of his pension and on 01.04.1985 or thereafter completed or will complete 15 years from his respective date of retirement will have his commuted portion of pension restored.

Commencement of qualifying service- Subject to the prov1s1ons of pension rules, qualifying service of a railway servant shall commence from the date he takes charge of the post to which he is first appointed either substantively or in an officiating or temporary capacity:

Emoluments: – The expression – (a) “emoluments”, for the purpose of calculating various retirement and death benefits, means the basic pay as defined in clause (i) of rule 1303 of the Code which a railway servant was receiving immediately before his retirement or on the date of his death:
Provided that the stagnation increment shall be treated as emolument for calculation of retirement benefits;

(b) “pay’ in these rules means the pay in the revised scales under the Railway Services (Revised Pay) Rules, 2016 .

No pensionary benefits are admissible to a railway servant who is dismissed or is removed or resigns from the railway service.

The authority competent to dismiss or remove a railway servant may, if the case is deserving of special consideration as per the laid down norms, sanction · a Compassionate Allowance not exceeding 2/3rd of pension or gratuity or both with would have been admissible to him if he had retired on Compensation Pension.

A railway servant compulsorily retired from the service as a penalty may be granted by the authority competent to impose such a penalty pension or gratuity or both at a rate not less than 2/3rd and not more than full Compensation Pension (earlier Invalid Pension) or gratuity or both admissible to him on the date of his compulsory retirement.

Recovery and adjustment of Government or rail way dues from pensionary benefits– (1) For the dues other than the dues pertaining to occupation of Government or Railway accommodation, the Head of Office shall take steps to assess the dues “one year” before the date on which a railway servant is due to retire on superannuation.

(1A) The assessment of Government or Railway dues as above shall be completed by the Head of Office eight months prior to the date of retirement of the railway servant.
(Authority : File No. 2015/F(E) III/1(1)/4 dt.17.06.16)

(2) The railway or Government dues as ascertained and assessed, which remain outstanding till the date of retirement or death of the railway servant , shall be adjusted against the amount of the retirement gratuity or death gratuity or terminal gratuity and recovery of the dues against the retiring railway servant shall be regulated in accordance with the provisions of (4) below.

(3) For the purposes of this rule, the expression “railway or Government dues” includes-

(b) dues other than those pertaining to railway or Government accommodation, namely balance of house-building or conveyance or any other advance, overpayment of pay and allowances, leave salary or other dues such as Post Office or Life Insurance premia, losses (including short collection in freight charges shortage in stores) caused to the Government or the railway as a result if negligence or fraud on the part of the railway servant while he was in service.

(4) (i) A claim against the railway servant may be on account of all or any of the following : –

(a) losses (including short collection in freight charges, shortage in stores) caused to the
1 Government or the railway as a result of negligence or fraud on the part of the railway servant while he was in service;

(b) other Government dues such as over-payment on account of pay and allowances or other dues such as house rent, Post Office or Life Insurance Premia, or outstanding advance

(ii) Recovery of losses specified in (a) of (i) above shall be made subject to the conditions laid down in rule 8 being satisfied from recurring pensions and also commuted value thereof, which are governed by the Pension Act, 1871 (23 of 1871). A recovery on account of item (a) of (i) above which cannot be made in terms of pension rule, and any recovery on account of items (b) and (c) of (i) above that cannot be made from these even with the consent of the railway servant , the same shall be recovered from retirement, death, terminal or service gratuity which are not subject to the Pensions Act , 1871 (23 of 1871). It is permissible to make recovery of Government dues from the retirement, death, terminal or service gratuity even without obtaining his consent, or without obtaining the consent of the member of his family in the case of a deceased railway servant.
(iii) Sanction to pensionary benefits shall not be delayed pending recovery of any outstanding Government dues. If at the time of sanction, any dues remain unassessed or unrealised the following courses should be adopted: –

(a) In respect of the dues as mentioned in (a) of (i) above. A suitable cash deposit may be taken from the railway servant or only such portion of the gratuity as may be considered sufficient, may be held over till the outstanding dues are assessed and adjusted.

(1) The retiring railway servant may be asked to furnish a surety of a suitable permanent railway servant. If the surety furnished by him is found acceptable, the payment of his pension or gratuity or his last claim for pay, etc. should not be with held and the surety shall sign a bond in Form 2.

(2) If the retiring railway servant is unable or nor willing to furnish a surety, then action shall be taken as specified in (iii) above.

(3) The authority-sanctioning pension in each case shall be competent to accept the surety bond in Form 2 on behalf of the President.

(iv) In all cases referred to in (a) and (b) of (I) above of 4 above, the amounts which the retiring railway servants are required to deposit or those which are with held from the gratuity payable to them shall not be disproportionately large and that such amount are not with held or the sureties furnished are not bound over for unduly long periods. To achieve this the following principles should be observed by all the concerned authorities :-

(a) The cash deposit to be taken or the amount of gratuity to be withheld should not exceed the estimated amount of the outstanding dues plus twenty-five per centum thereof.
(b) Dues mentioned in (I) of 4 above should be assessed and adjusted within a period of three months from the date of retirement of the railway servant concerned.

(c) Steps should be taken to see that there is no loss to Government on account of negligence on the part of the officials concerned while intimating and processing of a demand. The officials concerned shall be liable to disciplinary action in not assessing the Government dues in time and the question whether the recovery of the irrecoverable amount shall be waived or the recovery made from the officials held responsible for not assessing the Government dues in time should be considered on merits.

(d) As soon as proceeding of the nature referred to in pension rule are instituted , the authority which instituted the proceedings should without delay intimate the fact to the Account Officer. 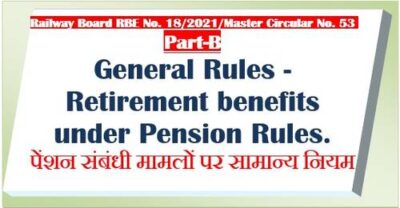