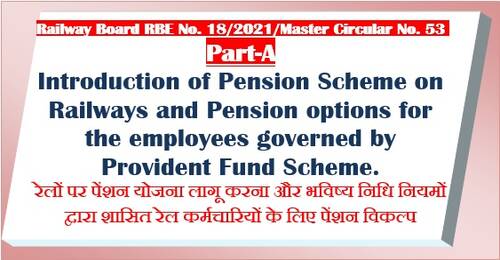 Pension Scheme on Railways and Pension options for the employees governed by Provident Fund Scheme – Part A – Master Circular – RBE No. 18/2021

Introduction of Pension Scheme on Railways and Pension options for the employees governed by Provident Fund Scheme.

1. Pension Scheme was introduced on the Railways on 16.11.57 effective from 01.04.57 vide Railway Board’s letter No. F(E)/50/RTI/6 dated 16.11.57. All railway employees who entered in service on and after 16.11.57 are governed by the said Pension Scheme. The new Pension Scheme was practically an adoption of the provisions of the Railway Pension Rules 1950 promulgated as the “Liberalised Pension Rules, 1950” vide Railway Board’s letter No. E48-CPC/208 dated 8th July 1950, as amended & clarified from time to time.

2. At the time of introduction of pension scheme on the Railways, pension option was also allowed to all those non-pensionable railway servants who were in service on 01.04.1957 or had joined railway service between 01.04.1957 and 16.11.1957 in preference to the Provident Fund Scheme by which they were governed. This option was open till 30.09.1959.

3. As a result of various improvement in the service conditions or implementation of the Pay Commission’s recommendations etc. fresh options were again allowed to the staff to join the pension scheme as these improvements had bearing on the pensionary benefits. In all, 12 such options were allowed. The details of these orders are as under:-

4. As per the last pension option order issued under Board’s letter No. PCIV/87/lmp/PN1 dated 08.05.1987, CPF beneficiaries who were in service on 01.01.1986 and those who continued to be in service on the date of issue of the said order were , however , automatically deemed to have come over to the Pension Scheme unless they specifically opted to continue under the Contributory Provident Fund Scheme. The last date for such option was 30.09.87.

5. ‘All pension option orders issued from time to time were made applicable retrospectively from the specified dates as mentioned in each order . The staff who had retired in the intervening period but were otherwise eligible to opt for the pension scheme were, therefore, also given the option to join the pension scheme by refunding the payment of settlement dues that they had received under the Contributory Provident Fund Scheme. Similarly, the families of the deceased employees who were eligible for these options were also allowed the option to jo in the pension scheme by refunding the payments they had received under the Provident Fund Scheme.

6. Apart from the twelve options given to the staff referred to above, the families of the deceased railway employees were also given the following option to opt for the Pension Scheme by issue of following separate orders.

7. Besides the above orders, instructions were also issued under Board’s letter No. F(E)III/68/PN1/37 dated 07.10.1970 and 16.07.1971 as per which the request from the families of the employees, who had retained the Provident Fund Scheme and were either killed or died as a result of injuries sustained in the due performance of their duties were also considered on merits for being allowed to join the pension scheme. Further, under Board’s letter No. F(E)lll/84/PN1/17 dated 16.07.85, families of railway employees who died in harness would also come over to the pension scheme. 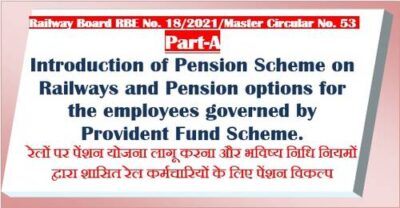