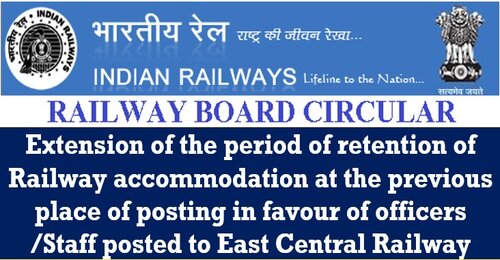 Extension of the period of retention of Railway accommodation in favour of officers /Staff posted to East Central Railway: RBE No. 32/2021

Extension of the period of retention of Railway accommodation in favour of officers /Staff posted to East Central Railway RBE No. 32/2021 GOVERNMENT

Sub: Extension of the period of retention of Railway accommodation at the previous place of posting in favour of officers /Staff posted to East Central Railway.

The issue of permission to Railway officers/staff posted on East Central Railway to retain Railway quarters at their previous place of posting beyond 31.12.2020 has been considered by Railway Board.

2. In exercise of the powers vested with the full Board to make reasonable relaxations in public interest for a class/group of employees in all or any of the provisions regarding house allotment/retention, the full Board, have decided that permission for retention of Railway accommodation at the place of previous posting for officers and staff posted to East Central Railway may be further extended up to December, 2022.

3. This issues with the concurrence of the Finance Directorate of the Ministry of Railways.

Loading...
Newer Post
Instructions regarding the procedure to be followed in releasing the person detained/ arrested by RPF: Security Circular-04/2021
Older Post
DA hike in June 2021: According to the JCM the center may announce जेसीएम के अनुसार जून 2021 में DA बढ़ोतरी की घोषणा