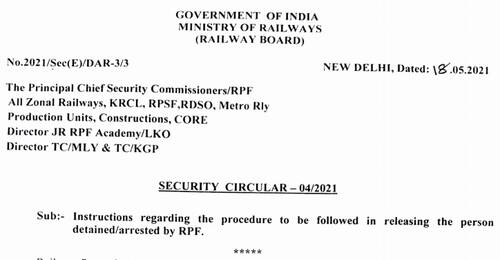 Instructions regarding the procedure to be followed in releasing the person detained/ arrested by RPF: Security Circular-04/2021

Instructions regarding the procedure to be followed in releasing the person detained/ arrested by RPF: Security Circular-04/2021

GOVERNMENT OF INDIA
MINISTRY OF RAILWAYS
(RAILWAY BOARD)

Sub:- Instructions regarding the procedure to be followed in releasing the person detained/ arrested by RPF.

Recently, some instances have come to the notice where it has been found that officers have not adopted proper procedure in releasing the persons detained after examination. Instances have also come to notice wherein procedure mentioned in CrPC was not followed in releasing arrested accused on Bond or Bail-Bond (in Bailable Offences). Such instances have caused embarrassment to the administration resulting in adverse impact on the image of the force. Therefore, there is a need for system Improvement by creating awareness among Subordinate Officers of the Force regarding the procedure in such cases.

In view of above, the following precautions may be taken while releasing person detained/arrested by RPF –

Above instructions are not exhaustive. Zonal railways may issue supplementary instructions cased on legal requirements and in the interest of transparency and administration of justice.

Loading...
Newer Post
Authorization of Private Sector banks for extending Government business: Railway Board RBA No. 30/2021
Older Post
Extension of the period of retention of Railway accommodation in favour of officers /Staff posted to East Central Railway: RBE No. 32/2021