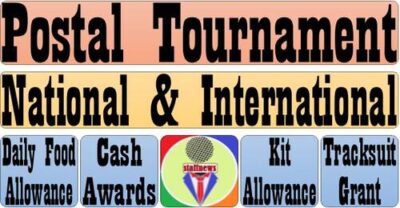 All Heads of Postal Circles

I am directed to invite your kind attention to the minutes (Circulated vide No. 2-02/2021-WL&Sports dated 08.04.2021) of the 24th Postal Sports Board Meeting held on 25th March 2021 under the chairmanship of Secretary (Posts) and Co­ chairmanship of DG (Postal Services). In the meeting, total 16 items were taken up for consideration and after discussion; the decisions taken in case of 7 items are hereby conveyed as under. The orders for remaining items will be issued separately as and when final decision is taken.

(III) Item No. 3 Enhancement of rates of Cash Awards (given to winners of Postal Tournaments/Events). It has been decided to enhance the rate of cash awards as follows:

For Team Based Events (Football, Volleyball, Basketball , Cricket, Kabaddi and Hockey) cash awards to be given at following rates:

It has been decided to enhance the rates of Kit Allowance for All India Postal Sports Tournaments/Cultural Meet as follows:

*The allowance will be paid to participant per event basis. No restrictions on number of tournaments player/officials/participant can take part in.

(VI) Item No. 5 Enhancement of Kit Allowance given to team for National and International Level Tournament.
It has been decided to enhance the rates of Kit Allowance given to India Posts team for National/International Level Tournaments to Rs 2000 (from previously paid rate of Rs 1500). It shall be applicable for teams nominated through Postal Directorate.

(i) Fixing the amount/ceiling for Tracksuit granted to players
(ii) Giving tracksuit every year instead of 2 year.

It bas been decided to grant Rs 1500/- per year for tracksuit to participants of All India Postal Sports Tournaments.