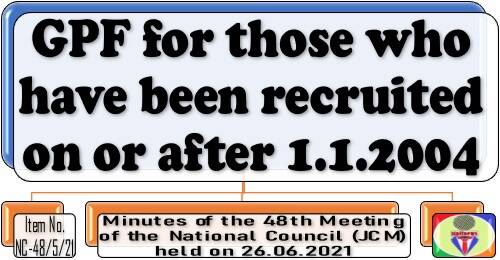 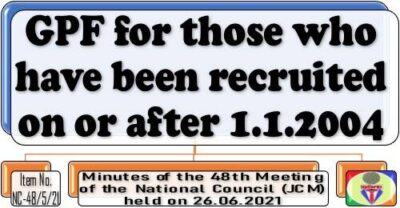 The issue raised in brief at the previous meeting is that the employees appointed on or after 1.1.2004 are covered by the New Pension Scheme (NPS). GPF is also not applicable. The contributions made under NPS are fully locked during service. There is no provision for withdrawal like in GPF which is necessary for meeting social obligations like marriages etc. Hence, employees may be allowed to contribute to GPF. In the previous meeting, the official side had agreed to examine whether the existing ceiling of withdrawal of 25% from NPS Tier-I could be further increased.

Addl. Secretary (Pers .), DoE, stated that DFS is administering the NPS, and if GPF was allowed , it would be deviation from the relevant Cabinet decision. Secretary, DFS, stated that an alternative to GPF is available in NPS as the Tier­ II, which is administered through PFRDA, and that NPS beneficiaries (i.e. new recruits after 1.1.2004) , have been given the option of opening Tier-II account under NPS in lieu of GPF which has no restriction on the withdrawals. Further, withdrawal up to 25% of the subscriber’s contribution under NPS Tier-I is also allowed. He also informed that the rate of return in Tier -II has been around 10% over the last few years, as against the rate of interest of about 7% in GPF.

Shri Shiv Gopal Mishra, Secretary , Staff Side representative stated that NPS is dependent on market, and that in the last meeting It was discussed that an option may be given for willing employees to join GPF.

Decision: Chairman directed that the proposal for giving option to the employees for joining GPF in lieu of NPS Tier-II may be examined by DFS and DoE.