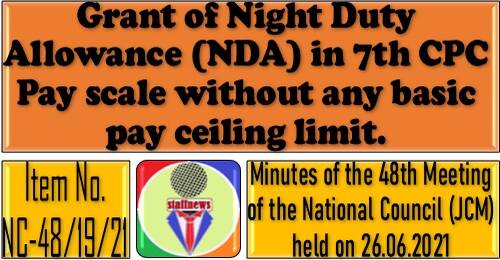 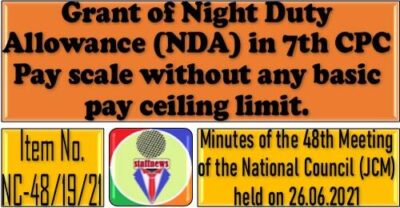 Secretary, Staff Side, stated that the issue of NDA was an important issue and, as such, directions are requested from the Cabinet Secretary. He stated that the imposition of limit of Rs.43600 has hurt the employees badly.

Shri Srikumar, Member, Staff Side, said that in MoD , the case has been heard up to the Supreme Court level and the Supreme Court has ruled that if employees are deployed for night duty, they have to be given NDA without any ceiling of basic pay.

Leader, Staff Side, stated that the 7th CPC never recommended any pay limit. Hence, the limit of Rs.43600 is unjustified . A Technician in the grade pay of Rs.2400 has become ineligible for NDA due to the imposition of the limit of Rs.43600. He said that the Railways have sent a proposal to DoPT for removal of the ceiling limit but nothing has been done so far. If any additional justification was required, they were willing to give the same. Secretary, Staff Side stated that NDA is an outcome of the award given by Justice Miya Bhai Commission and, therefore, cannot be denied. Moreover, it should be left to the Ministries concerned because working conditions in different Ministries are different.

Chairman, Railway Board expressed the view that for the same functionality, there should not be two different sets of rules governing similarly placed employees. He informed that Railways have already held discussions on the issue with the Unions.