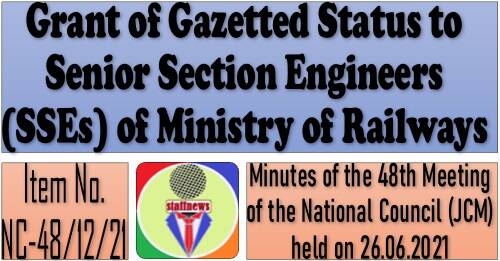 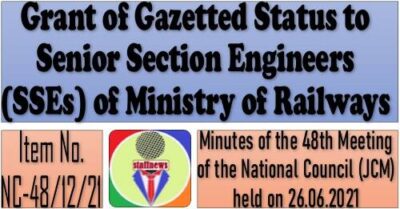 Chairman, Railway Board, informed that Railway management is keen to resolve the issue. The number of employees involved in the decision is about 70000, for whom the 7th CPC did not recommend the gazetted status. A Committee of Secretaries also examined this issue, but it could not be resolved . He stated that the element of direct recruitment in the SSE grade is from highly qualified candidates, but they currently stagnate at a low level without appropriate status.

Leader, Staff Side, in his remarks, mentioned that the representation given to the 7th CPC by the Railways was erroneous, which has resulted into this injustice. The SSEs function 24 hours and have no proper career progression. The Direct Recruit SSEs appointed in Rs.4600 GP only get MACP and no promotion, which is unfair. Secretary, Staff Side, also stated that SSEs are highly qualified and occupy a critical role, but the treatment given to them has always been unfair . He further said that when SSO’s in Audit/ Accounts and Railways have been given GP of 5400, it should not be denied to the SSE’s and the similarly placed supervisors in Railways. He also informed that earlier SSE’s and Chief Controllers were getting grade of 840- 1200 which has been down-graded.

Decision:- Chairman asked Chairman, Railway Board and DoE to resolve the issue expeditiously.