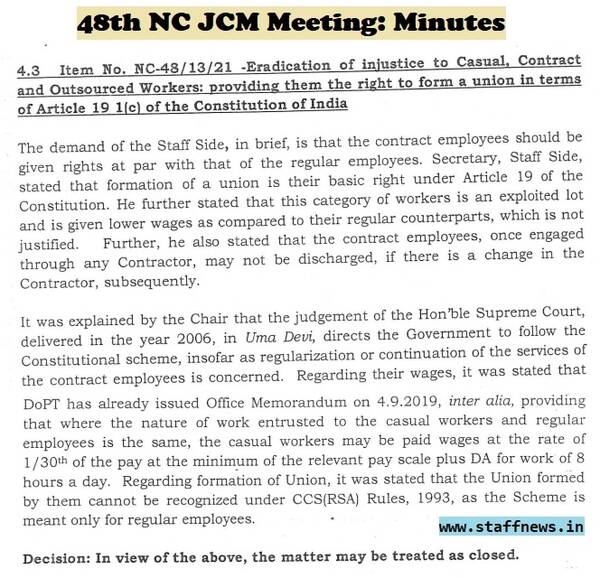 Item No. NC-48/13/21 -Eradication of injustice to Casual, Contract and Outsourced Workers: providing them the right to form a union in terms of Article 19 1(c) of the Constitution of India

The demand of the Staff Side, in brief, is that the contract employees should be given rights at par with that of the regular employees. Secretary, Staff Side, stated that formation of a union is their basic right under Article 19 of the Constitution. He further stated that this category of workers is an exploited lot and is given lower wages as compared to their regular counterparts, which is not justified. Further, he also stated that the contract employees, once engaged through any Contractor, may not be discharged, if there is a change in the Contractor, subsequently.

It was explained by the Chair that the judgement of the Hon’ble Supreme Court, delivered in the year 2006, in Uma Devi, directs the Government to follow the Constitutional scheme, insofar as regularization or continuation of the services of the contract employees is concerned. Regarding their wages, it was stated that DoPT has already issued Office Memorandum on 4.9.2019, inter alia, providing that where the nature of work entrusted to the casual workers and regular employees is the same, the casual workers may be paid wages at the rate of 1/ 30th of the pay at the minim;.im of the relevant pay scale plus DA for work of 8 hours a day. Regarding formation of Union, it was stated that the Union formed by them cannot be recognized under CCS(RSA) Rules, 1993, as the Scheme is meant only for regular employees.

Decision: In view of the above, the matter may be treated as closed. 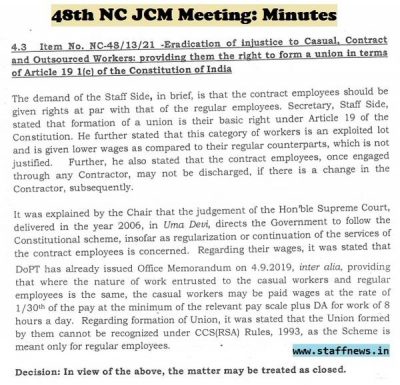