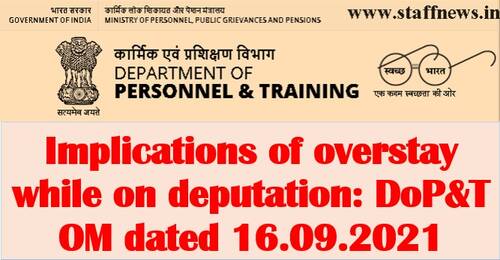 Implications of overstay while on deputation: DoP&T OM dated 16.09.2021

Implications of overstay while on deputation: DoP&T OM dated 16.09.2021

No.2/1/2021-CS.1 (U)
Government of India
Ministry of Personnel, P.G. and Pensions
(Department of Personnel & Training)

Subject: Implications of overstay while on deputation — Reg.

Attention of Ministries /Departments/State Governments /PSUs/Local Bodies/Autonomous Bodies/Other Organizations are invited to Para 8.3.1(ii) of this Department’s O.M. No.6/8/2009 dated 17.06.2010 which inter-alia states that if the borrowing organisation wishes to retain an official beyond the prescribed tenure, it shall initiate action for seeking concurrence of lending organisation, individual concerned etc. six months before the date of expiry of tenure. In no case it should retain an official beyond the sanctioned term unless prior approval of the competent authority to grant further extension has been obtained.

2. Further, attention is invited to DOPT’s O.M. No.AB14017/30/2006-Estt (RR) dated 29.11.2006 and O.M No.6/8/2009-Estt (Pay II) dated 1st March, 2011 which stipulates that the officers on deputation would be deemed to have been relieved on the date of expiry of the deputation period unless the Competent Authority has with requisite approvals, extended the period of deputation, in writing, prior to the date of expiry.

3. Recently, instances have come to notice that even though the period of deputation is specified in the relevant orders communicating the cadre clearance by this Division in respect of CSS officers proceeding on deputation to ex-cadre posts, many officers are not reporting back to the CS.I Division on expiry of their deputation tenure. The overstayal in such cases are not in consonance with the guidelines, and has been viewed seriously.

4. The above instructions are, therefore, reiterated for the information of the borrowing organisation concerned – as per list attached and scrupulous adherence to the timelines prescribed therein, so as to ensure timely grant of requisite clearance.

(Ravi Vazirani)
Under Secretary to the Government of India
Tele: 24629414 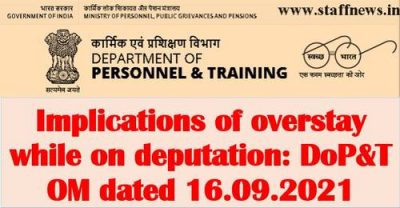