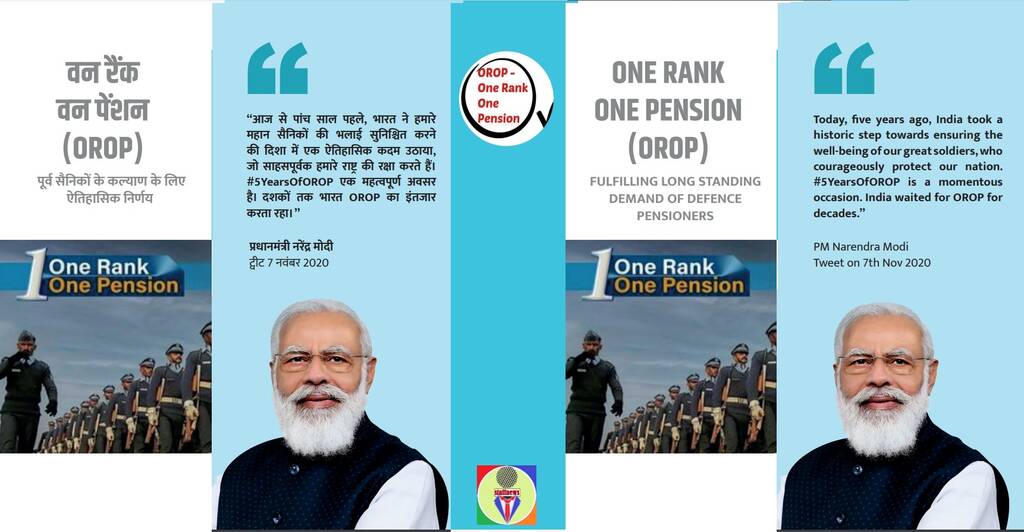 Today, five years ago, India took a historic step towards ensuring the well-being of our great soldiers, who courageously protect our nation. #5YearsOfOROP is a momentous occasion. India waited for OROP for decades.” 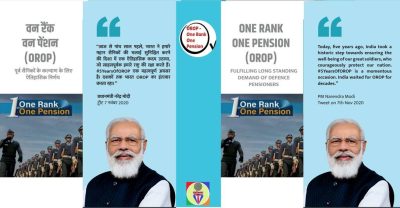 Before implementation of OROP, the computation of pension was linked to the pay drawn by the personnel in a particular pay scale/ pay band at the time of his/her retirement. Pay scales are revised to the higher side generally on the recommendation of Pay Commissions. As such, the personnel retiring after the revision of the pay scales got more pension than those who had already retired. Hence, the gap remained in the pension of the past and present retirees.

Our soldiers were patient for 40 years. They have never been out of discipline. They have always respected the system. They kept asking for this scheme, and our soldiers who are ready to sacrifice their lives for our country, were lied to.

Ex-Servicemen had been agitating for implementation of OROP for more than 40 years, but the same was not finalized prior to 2015. The issue of ‘One Rank One Pension’ has been considered in the past by various committees and bodies and generally not found acceptable on account of the principles as well as significant financial implications not only for defence services but also for the civilian employees as a whole. The substance of recommendations of these committees and bodies is summarized as under:

3rd Central Pay Commission: It recommended weightages in qualifying service for pension from 3 to 9 years depending on the ranks.

High Level Committee on problems of Ex-Servicemen – 1984 (K.P. Singh Dev Committee): The Committee recommended that the Government should consider the issue of ‘One Rank One Pension’ particularly in the light of the principle, which has been already established with respect to the pension of judges of the Supreme Court and the High Courts.

The 4th Central Pay Commission: The Commission observed that it is difficult to accept the suggestion for equalization of pension. Moreover, this would involve a considerable administrative and accounting work without conferring any uniform benefits to various categories of pensioners.

High Level Empowered Committee –1991 (Sharad Pawar Committee): No specific recommendation on the issue of ‘One Rank One Pension’ was given by the Committee.

5th Central Pay Commission: The Commission did not recommend grant of ‘One Rank One Pension’ by stating that every Pay Commission gives certain benefits in pay which are over and above the impact of inflation, either due to up gradation of recruitment qualifications or change in job contents. The benefits accorded on this account need not necessarily be passed on to the pensioners.

Inter-Ministerial Committee: An Inter-Ministerial Committee was set up on 27.02.2003 by the Department of Pension and Pensioners’ Welfare to consider the demand of ‘One Rank One Pension’. The Committee, in its report submitted on 24.09.2004 did not favour grant of ‘One Rank One Pension’, but recommended grant of modified parity based on the maximum of the revised scale of pay introduced with effect from 01.01.1996 for PBOR.

The Parliamentary Standing Committee on Defence: The Committee in its 20th and 21st report reiterated their earlier recommendations for providing ‘One Rank One Pension’ to the Armed Forces Personnel.

Views of Ministry of Law on ‘One Rank One Pension’: “The present system has stood the test of judicial scrutiny. The same cannot be said for ‘One Rank One Pension’ and the legal feasibility of the same stands open to be adjudicated. Besides, there are financial aspects too that need to be kept in view”.

Cabinet Secretary Committee, 2009: The Committee went into this demand and other related issues, but did not recommended ‘One Rank One Pension’.However,it made seven recommendations aimed at narrowing the gap between past and current pensioners.

Cabinet Secretary Committee (2012): The Committee did not recommend implementation of ‘One Rank One Pension’, however, it recommended various other ways to enhance pension of past retirees.

STEPS TAKEN BY THE GOVERNMENT

The Government accepted the ‘One Rank One Pension’ by way of its mention in the President’s address to both Houses of Parliament on 09.06.2014 after the constitution of 16th Lok Sabha and an allocation of ₹ 1000 crore was provided in the Budget 2014-15 for implementation of OROP.

In pursuance of the Government decision to implement OROP for Defence Forces, a series of meetings were held in the Ministry of Defence for working out the details of its implementation. Keeping in view the magnitude and complexity of Defence pension, extensive consultations were held with experts and Ex- Servicemen before issue of Government order on implementation of OROP.

Demonstrating its commitment to the welfare of Ex-Servicemen, Government of India took the historic decision to implement OROP by issuing order on 07.11.2015. Armed Forces Personnel retired up to 30.06.2014 were covered under this Order.

OROP implies that uniform pension be paid to the Armed Forces Personnel retiring in the same rank with the same length of service regardless of their date of retirement. Thus, OROP implies bridging the gap between the rate of pension of the current pensioners and the past pensioners at periodic intervals. Salient features of OROP order were as under:

Additional pension as applicable to the old age pensioners/family pensioners on attaining the relevant age (80 years and above) was also enhanced by the Pension Disbursing Authorities (PDAs) from 1.7.2014 or the date from which the pensioner attained the age of 80 years or more, whichever was later.

Years-wise details of actual expenditure made on release of arrears for implementation of OROP are as under:

WHO BENEFITS FROM THE REFORM

OROP beneficiaries also got the benefit of fixation of pension under 7th CPC while calculating the pension by multiplication factor of 2.57.

Here are some glimpses of OROP’s success being acknowledged.

One Rank One Pension

Hon’ble Prime Minister on the occasion of dedication of National War Memorial to the Nation on 25 February 2019.