The committee hence recommends that the provisions of the letter dated 11-09-2001 (Annexure·20) issued by the DoPPW on the civil side whereby the benefits of the new categories of  enhanced disability/liberalized pension and family pension for post-1996 retirees were extended to pre· 1996 retirees also may be extended to military pensioners mutatis mutandis by extending the principles of MoD letter dated 31-01·2001 (issued by MoD only for post·1996 retirees) to pre-1996 retirees on the lines of the DoPPW letter dated 11-09-2001. This issue has also been deliberated and adjudicated upon by the Hon’ble Supreme Court already in K/S Buttar’s  case (supra). It would be discriminatory to treat civilian and defence retirees differently when the Categories mentioned in all of the letters above emanate from a common recommendation of the same pay commission.

a) To extend the provisions of the GoI, MoD letter dated 31st January, 2001 of pre· 01.01.1996 retirees would create further complexities as the pension of all. kinds i.e service, disability, war injury and various family pensionary awards would required to be examined manually to decide the amended pensionary awards in accordance with provisions laid down in the said Govt. Letter. Therefore, it is opined that old cases may not be reopened.

b) Broad Banding benefit provided to post· 1996 retirees vide MoD letter No. 1(2)/97/D(Pen-C) dated 31.01.2001 has already been extended to pre -1996 retirees vide Col MoD letter No. 12(16)/2009(Pen/ Pol) dated 15.09.2014. Further, by implementation of OROP, the distinction in pension of pensioners of different vintage has largely been addressed. Reopening of the issue will lead to review in huge number of cases, re-categorizing different category of pensioners, verification by manual intervention, finding out circumstances of death for different type of causalities by manual verification inter-alia. Hence, this office is of the view, this would lead to multiplication of problems instead of sorting.

In order to improve the pension of PBORs, concept of weightage was introduced in 3rd CPC. 5 years weightage was allowed to PBORs in addition to their Qualifying Service(QS) so that they could get a higher pension. This was later enhanced by the Group of Minister (GoM) 2005 to 6, 8 and 10 to the three lowest group of PBORs i.e Sepoy, Naik and Havildar. This has again been enhanced by Cabinet Secretary Committee (CSC) 2012 to 8, 10 and 12 to the same group of PBORs. This enabled the PBORs to reach the maximum service of about 32 to 33 years of service, thus earning maximum pension. Another benefit given to PBORs is that their pension was always calculated on the maximum of the pay scale of the rank held at the time of discharge, which no individual ever actually reaches, The subsequent revision of pension for pre-2006 retirees viz, CSC 2009, CSC 2012 has been done on that maximum of the pay scale.

In addition to. the above, Govt. had implemented One Rank One Pension (OROP) Scheme for Defence Forces personnel. On implementation of OROP, the benefits rendered by 2013 retirees are passed onto past-retirees as their pension is being calculated on the basis of the average of minimum and maximum pension of personnel retired in 2013 in the same rank and with the same length of service under DROP scheme. No such OROP scheme exists in Civil Side, so far. Defence Pension may not be equated with Civil Pension. The number of disability pensioners is very large in comparison to Civil side and as stated by the CGDA the records in regard to mode of retirement/ discharge/disability is required to be checked/ verified manually on case to case basis which might not be available at their end.

In view of the above, the recommendation was not found feasible for implementation. 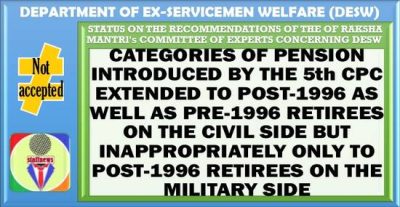 Loading...
Newer Post
Extension of timings of eSanieevani Teleconsultation w.e.f. 17.01.2022
Older Post
Requirement of 10 months service in a particular rank to earn the pension of that rank