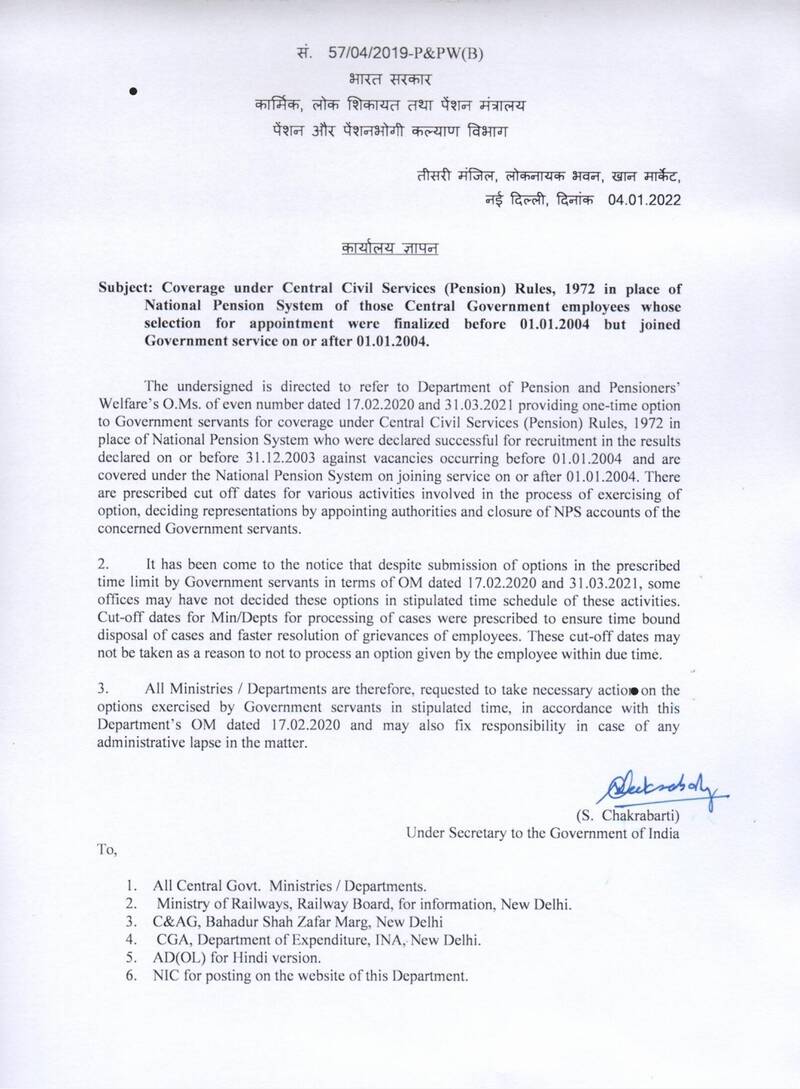 Coverage under Pension Rules in place of NPS for selected before 2004: DoP&PW OM 04.01.2022 regarding option

Coverage under CCS (Pension) Rules, 1972 in place of NPS of those CG employees whose selection for appointment were finalized before 01.01.2004 but jo

Coverage under CCS (Pension) Rules, 1972 in place of NPS of those CG employees whose selection for appointment were finalized before 01.01.2004 but joined Government service on or after 01.01.2004

Subject: Coverage under Central Civil Services (Pension) Rules, 1972 in place of National Pension System of those Central Government employees whose selection for appointment were finalized before 01.01.2004 but joined Government service on or after 01.01.2004.

The undersigned is directed to refer to Department of Pension and Pensioners’ Welfare’s O.Ms. of even number dated 17.02.2020 and 31.03.2021 providing one-time option to Government servants for coverage under Central Civil Services (Pension) Rules, 1972 in place of National Pension System who were declared successful for recruitment in the results declared on or before 31.12.2003 against vacancies occurring before 01.01.2004 and are covered under the National Pension System on joining service on or after 01.01.2004. There are prescribed cut off dates for various activities involved in the process of exercising of option, deciding representations by appointing authorities and closure of NPS accounts of the concerned Government servants.

2. It has been come to the notice that despite submission of options in the prescribed time limit by Government servants in terms of OM dated 17.02.2020 and 31.03.2021, some offices may have not decided these options in stipulated time schedule of these activities. Cut-off dates for Min/Depts for processing of cases were prescribed to ensure time bound disposal of cases and faster resolution of grievances of employees. These cut-off dates may not be taken as a reason to not to process an option given by the employee within due time.

3. All Ministries / Departments are therefore, requested to take necessary action on the options exercised by Government servants in stipulated time, in accordance with this Department’s OM dated 17.02.2020 and may also fix responsibility in case of any administrative lapse in the matter.

(S. Chakrabarti)
Under Secretary to the Government of India 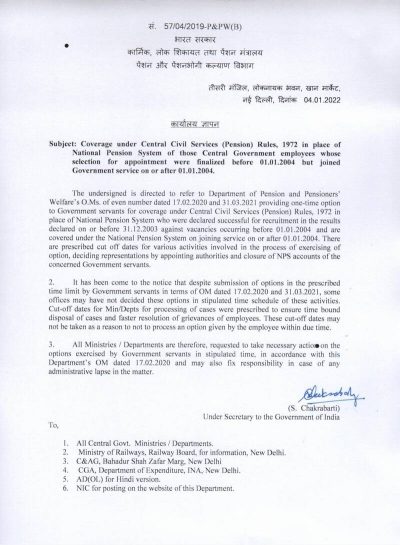