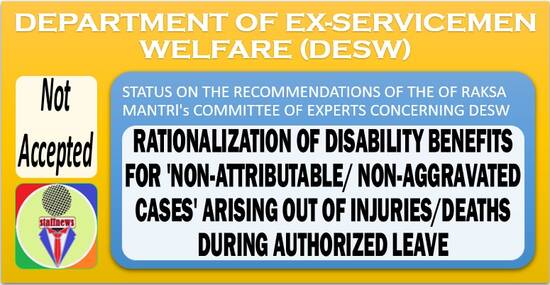 2.2.2 RATIONALIZATION OF DISABILITY BENEFITS FOR ‘NON-ATTRIBUTABLE/NON-AGGRAVATED CASES’ ARISING OUT OF INJURIES/DEATHS DURING AUTHORIZED LEAVE:

The Committee recommended as following:

(a) That it may be decided that injuries or deaths during periods of authorized leave/absence (except in cases of gross negligence/ gross misconduct/ intoxication/ action inconsistent with military service) may be deemed as ‘attributable to service’ by issuing a clarification to the effect It may be decided to interpret the existing rules in a beneficial manner in line with the points expressed above and also in line with the beneficial spirit in which the rules were promulgated.

(b) This singular ·action would not only result in reducing litigation drastically but also act as a morale booster for disabled military veterans and families of personnel who may have died during periods of authorized leave, besides elevating the respect for the system in the eyes of the military community. This assumes even more importance since the protection of Section 47 of the Persons with Disabilities Act, 1995, is not available to defence personnel.

(c) Clarification to the above effect may be issued to all concerned for future cases. All appeals in the Hon’ble Supreme Court on the said subject are recommended to be withdrawn and all pending litigation in Courts/Tribunals or future litigation for similar past cases that may arise, may be directed to be conceded in favour of claimants except in cases where the soldiers have themselves been found blameworthy for the disability.

Disability pension is granted under the circumstances mentioned under category B to E of MoD letter No. 1(2)/97/D(Pen-C) dated 31.01.2001. These circumstances are Connected with performance of military duties.

2.1 Period of leave, except para 2 above, is not connected to performance to military duty, there is no case made out in favour of the proposal, to treat death/disability during leave as attributable to military service.

3. CGDA office to whom the matter was referred, has furnished following comments:-

“As per extent provisions, attributability/aggravation of ]COs/ORs and ICOs is decided by the O.I/C Records and Service Hqrs respectively on the basis of recommendation of Medical Board and circumstances of death/injury. Para 4.1 of Govt. MoD letter 1(2)/ 97/D(Pen-C) dated 31.01.2001 has made provisions for grant of pens fonary benefits based on the circumstances of death/disability. It is very evident that attributable and aggravation are principle factors in categorization of disability.

4. In view of the above, consideration of pensionary awards in cases which are neither attributable to nor aggravated by military service is not in consonance with the fundamental principles of granting disability pension. Further it is also mentioned that as per Para-9 of Entitlement Rule-2008 only joining to and from leave is treated as dut:y not the entire leave period.”

5. Keeping in view of CGDA is views and para 2 above, the proposal for grant of disability pension for disability arising out of injuries occurs during leave period does not have merit to keep at par with the personnel whose injury/disability is attributable to or aggravated by military service.

The Hon’ble Supreme Court vide its order dated 20.09.2019 in Civil Appeal No. 4981 of 2012 filed by Uol & ors Vs Dharambir Singh has also held that “the mere fact of a person being on “duty” or otherwise, at the place of posting or on leave is not the sole criteria for deciding attributability of disability/death. There has to be a relevant and reasonable causal Connection, howsoever remote, between the incident resulting in such disability/death and military service for it to be attributable. An accident or injury suffered by a member of the Armed Forces must have some casual connection with military service and at least should arise from such activity of the member of the force as he is expected to maintain or do in his day-to-day life as a member of theforce. 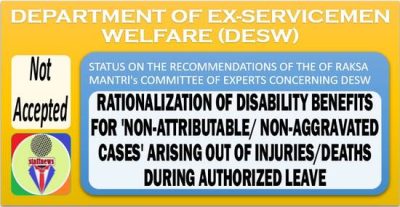